Cannabis and Yoga as Complementary Medicines

By Kimberly Ruble on February 6, 20142 Comments 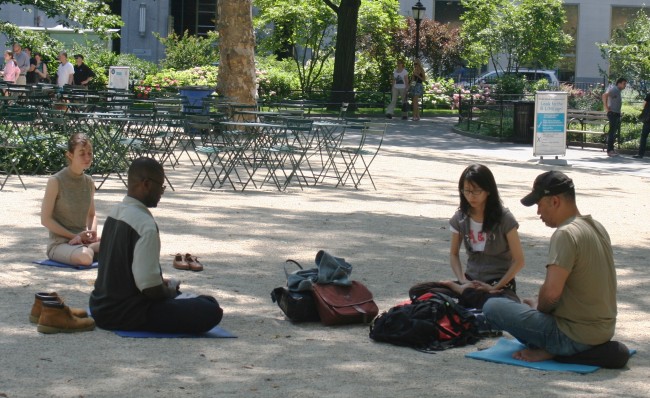 Two practices which are rapidly gaining traction for their medical benefits; cannabis use and yoga, have stirred up controversy recently for what some believe are their synergistic effects as complimentary medicine. Called Ganja Yoga, 420 Remedy Yoga, or Cannabis-enhanced, a growing number of yoga instructors are more than accepting of medical marijuana patients; they are encouraging their students to partake in cannabis before and sometimes during class.

In Atwater Crossing, California, instructor Liz McDonald teaches 420 Remedy Yoga. In Toronto, Canada, instructor Dee Dussault offers cannabis-enhanced classes at Follow Your Bliss yoga, and instructor Lu offers ganja yoga at Toronto’s The House of Yoga. These are just the instructors making headlines, how many more must there be who avoid the spotlight? In states where cannabis has recently been decriminalized the potential for more synergistic pairings of the two practices is palpable.

Take Colorado for example. The state has been a long-time haven for yoga practitioners and conferences, it would be shocking not to find a few cannabis-enhanced yoga classes lighting up across the state. Each of these instructors have their own reasons for offering classes where cannabis use is accepted and welcome. All of them being experienced yoga instructors, some of which have been instructing yoga students under the influence of cannabis for years, believe in the validity of combining the two practices.

However, there are plenty of yogis who strongly disagree. According to Julie Phillips-Turner, founder of Chesapeake Yoga and Wellness, cannabis and yoga don’t mix. In her article 5 Reasons Yogis Shouldn’t Smoke Marijuana she sights the Yoga Sutra and quotes renown yogi Swami Satyananda Saraswati to back up her beliefs. While her argument seems sound, she also associates the combination of the two practices with “modern day hippies,” and uses a slew of slang words such as grass and pot, yet makes no mention of the medical benefits of cannabis. When Turner-Phillips asks in her article “Would you offer the Dali Lama a joint? Most people do not think so. One can only imagine the response of the tens of thousands of medical marijuana users and advocates who would most certainly offer the Dali Lama a joint if he was suffering and they thought it would help.

The fact is cannabis is regarded as medicine. Health Canada alone has approved about 37,500 medical marijuana users, and that number is growing. New regulations go into effect on April 1 that allow nurse practitioners as well as doctors to write prescriptions, and Health Canada expects to see 450,000 users in a decade. Not to mention the countless other Canadian residents who self-medicate without a license. This brings up the question, is cannabis use complimentary to a yoga practice or is it yoga that compliments medical cannabis use? It seems that complimentary medicine generally refers to an alternative medicine used together with a conventional medical treatment.

For the conventional medical doctors who have been prescribing medical marijuana for over 15 years in Alaska, California, Washington, Oregon, and Maine, and in the 15 other states which have legalized medical marijuana use more recently, cannabis would be considered the conventional medicine and yoga the alternative therapy. As legalization spreads perhaps more yoga instructors will open up to the idea that cannabis use might make yoga practice a possibility for individuals who would otherwise be incapable of such activities.
So with this, the two practices which have rapidly gained traction for their medical benefits; cannabis use and yoga, have stirred up controversy recently for what some believe are their synergistic effects as complimentary medicine.

2 Responses to "Cannabis and Yoga as Complementary Medicines"