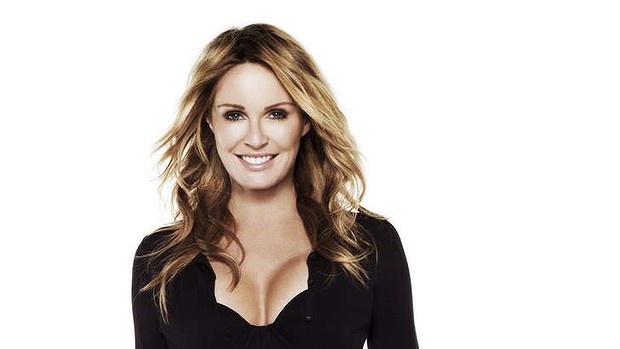 Charlotte Dawson, 47, a well-loved presenter on Australian television, has taken her own life and was found dead in her Sydney apartment this morning. Charlotte was a former model who judged on Australia’s Next Top Model as well as being the fashion editor on Women’s Day magazine.

Russell Crowe is among the many of her friends affected by the news to have broken down in tears.  Charlotte Dawson and Crowe were both originally from New Zealand but settled in Australia, and they both lived in the deluxe complex of Finger Wharf at Woolloomooloo.

Russell tweeted sadly, “Just don’t understand it. There’s not enough kind souls as it is. Rest in peace.”  Another friend confirmed that Charlotte had been in the “worst shape emotionally” for several days preceding.  The normally voracious tweeter and Instagrammer had left her accounts untouched, which worried those who knew her well.

There are no suspicious circumstances surrounding Charlotte’s death and it was known she had had a long struggle with depression. In September 2012 she had made another attempt on her life.  She was found just after 11am on Saturday, not long before her apartment was due to be open for a viewing, as she was preparing to sell it. This was one of many strains she had been under.

One incident which had a devastating effect on Charlotte Dawson was a prolonged assault by internet trolls in 2012. Ironically it was her endorsement of an anti-bullying campaign which led to her being targeted and bullied herself. She admitted it had been very difficult to cope with and to stay strong as anonymous trolls sent her death threats. She spoke out about it afterwards, in attempts to expose the practice and wrote about it in her book Kiss and Tell.  She said the attacks had been ferocious.

In a brave move, she confronted some of the attackers on national television and managed to forgive them. This was quite typical of her. She supported many hundreds of people on her social media platforms, especially those going through tough times, and campaigned for health and social justice.

A recent anxiety that had plagued the celebrity was that she did not appear to be nominated for a Logie award for Australia’s Next Top Model, although she had opted out of a further series to concentrate on a new homewares range. She had said that working in the media as a woman was so tiring, because of the relentless scrutiny of how you looked, and the abuse that came with that.  This was a torment of the woman so often described as beautiful, clever and funny.

Her final post on Instagram showed her looking plaintive as she was about to go onto the radio to talk about sex. She said “As you can see I’m racking my brains & have gone blank.”  Her picture still received hundreds of positive comments.

Her co-host on Australia’s Next Top Model, Alex Perry, also took to twitter to express his sorrow. He posted “We lost a beautiful, bright, shining star today.”   The prime minister of New Zealand, John Key, was also “shocked and saddened” when he learnt of her demise.

Charlotte had a tumultuous marriage to Scott Miller, an Australian Olympic swimmer. In her book she told of how she had an abortion before the Sydney Olympics because of his “hesitation” that they have a child at that time. As she put it “who needed a developing foetus when a gold medal was on offer?”  He did not go with her when she had the procedure.  This event triggered a deep depression which went on to haunt her for the rest of her life.

Miller had recently recorded an interview on Australia’s version of 60 Minutes, which Charlotte had said she was dreading to watch.  The marriage was a roller-coaster ride with rumors of drugs, affairs and sex tapes abounding. Miller was addicted to the drug known as ice.  Although the relationship ended ten years ago, Dawson still shook with nerves when she contemplated seeing her ex-husband on the television. She had gone overseas for five years to rebuild her life in the aftermath of the split.  She had said she still loved him and he was the only man she could ever consider being married to.

Very sadly, her fragile mental health was masked behind her confident and glamorous image, but underneath, she was often suffering from terrible panic attacks which could leave her hospitalized.  Friends who knew of her vulnerability are aghast at how her often seeming cheerfulness must have been a cover up. Jai Evans, her partner on the homeware range, said she had been upbeat when they had a meeting on Tuesday, and excited about the project. “I am beyond devastated,” he said.

Tributes are still pouring in for the beautiful Charlotte Dawson, who lived her life in the spotlight, but was assaulted by private demons. She never had her own children, but she would mother the contestants on Australia’s Next Top Model and was renowned for her kind heart. Her death leaves many shocked and stunned.