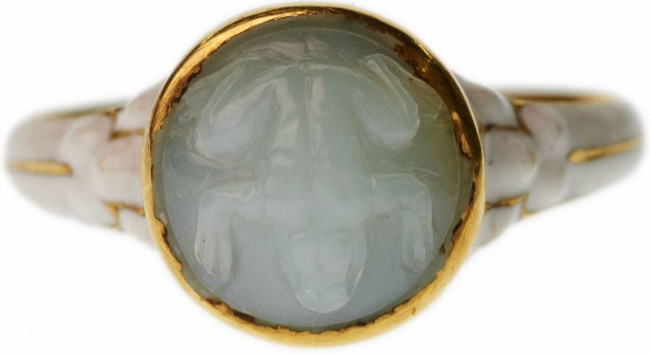 The Cheapside Hoard is an extraordinary collection of late 16th and 17th century jewels that were accidentally discovered in 1912. The nearly 500-piece collection is being displayed for the first time in its entirety at the Museum of London until April 27, 2014.

Nearly a century ago, a longstanding tenement house in Cheapside, located on a main thoroughfare near London’s St. Paul’s Cathedral, was slated for demolition. It was the summer of 1912. In the house’s brick-lined cellar, beneath a chalk floor, one of the workers began using a pickaxe.  He came upon a decaying, large wooden box. When opened, it held a magnificent cache of jewels: an enameled lizard made of gold and diamonds with Colombian emeralds down his back, dangling earrings with bunches of amethysts, an emerald carved into a parrot, cameos and intaglios from first or second century BC.

Workers lined their pockets with the precious treasures and took them to “Stony Jack” George Fabian Lawrence, a pawn shop owner who also procured items for museums. Stony Jack formed an agreement with the men, offering cash or beer, no questions asked, for any further discoveries uncovered in the course of their work.

In 1937, Lawrence told the Daily Herald that he explained to the workers that each bit and bob from metal scraps to glass or pottery that was uncovered could have “a story to tell the archaeologist,” and needed to be saved. Over the subsequent weeks, packages, pockets, hats and “handkerchiefs of jewelry” from the tenement house arrived at his office, and a collection, undreamt of, began to amass – diamonds, emeralds, sapphires, rubies and more – with some of the items dating back to the Byzantine period. 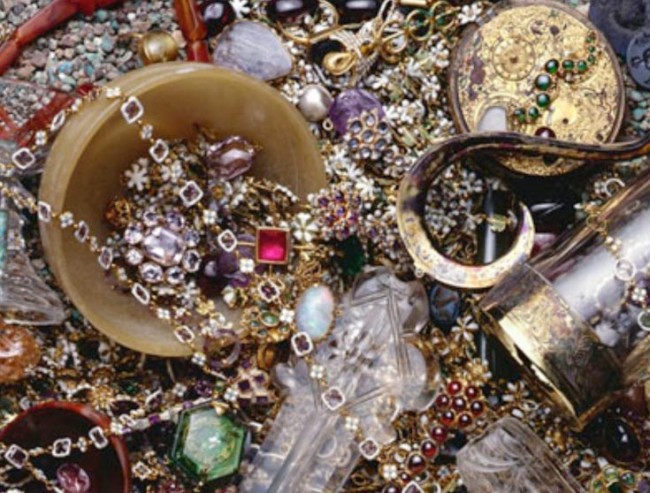 The Cheapside cache became Stony Jack Lawrence’s most substantial treasure find.  When all was said and done, the hoard, mostly Jacobean and Tudor jewelry, along with loose gems, perfume bottles and other functional items, totaled approximately 500 pieces.

Today, the majority of the collection is permanently located at the Museum of London. The Cheapside Hoard pieces continue to draw applause for their distinction and relatively pristine condition. According to Hazel Forsyth, Museum of London’s medieval and post-medieval collection senior curator, it is the biggest hoard of its kind.

The length of Cheapside at the demolition site was known as Goldsmith’s Row in the 17th century.  The London exhibition reconstructs the type of prosperous workshop that would have been found along the row. In addition to gems and jewelry, the exhibit also displays oil paintings from the same era. Sophisticated women adorned in enameled chains mimic the 30 necklaces hanging on display.

For years, Forsyth researched the Cheapside Hoard collection through old letters, books, stock lists and the jewels themselves. Through her investigation, she has been able to explain some of the mysteries surrounding the hoard.

In 1637, a gem dealer named Gerrard Pulman made the wrong decision to pay the East India Company for safe passage on the Discovery from the Orient back to England. He took with him a large sea-chest, along with some smaller boxes loaded with diamonds and jewels said to be valued at  £150,000. While bathing on the voyage, Pulman lost a walnut-sized diamond from a purse around his neck. The next night, the gem dealer was found dead. The ship’s surgeon declared that Pulman had been poisoned and “heaved over boorde.”

Once back in London, the wooden chests were opened. They were found half empty, with the missing jewels stolen by officers and crew. The gems were offered to jewelers across the city. Forsyth now believes that some of those pieces were part of the Cheapside Hoard. Other mysteries still remain as to who it was that buried the treasure and why it was never recovered. One explanation is that the Great Fire of London reduced the shops on Goldsmith Row to ash, but did not affect the treasure hidden beneath the cellar floors.

Not all of the pieces ended up in museums. In 1914, some of the workers went on a pub crawl extravaganza and “were not seen again for months.” Forsyth is certain that rare pieces still exist. She hopes that the Cheapside Hoard exhibition will bring them to light.