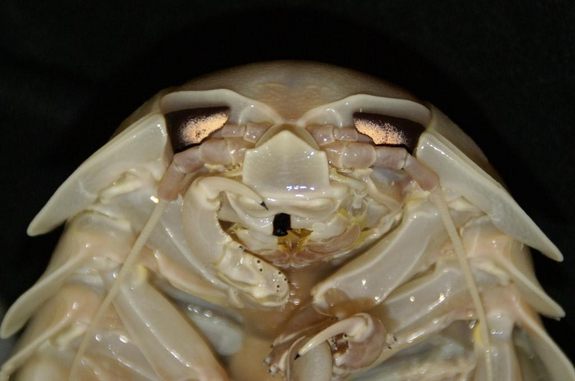 The last week of February ushers in the beginning of National Eating Disorders Awareness Week.  There are many different types of eating disorders from anorexia and bulimia to pica and coprophagia.  While many people believe that eating disorders are inherently human, other species also exhibit eating disorders.  An extreme example of starvation was recently seen in the story of an isopod living at Toba Aquarium.

Toba Aquarium is located in Japan on the eastern coast.  The isopod, dubbed creatively with the snappy name of “Giant Isopod No. 1” was removed from the waters near Mexico in 2007.  This particular giant isopod weighed in at almost two pounds and was approximately a foot long.  It was the first in a total of what would soon be eight captive isopods at Toba Aquarium.

An isopod is a strange-looking creature that comes from the deep-sea, a crustacean closely related to crabs and shrimp.  It looks very similar and is also related to, the small pill bugs commonly found in the garden.   The body of the isopod is protected by a hard, segmented shell.  It feeds indiscriminately off whatever dead critters end up on the sea floor as well live but slow-moving creatures like sponges.  Because of the scarcity of available food, the giant isopod has been known to go for long periods of time without eating.

Until recently, the long periods of time signified at most, a month or two.  The limits of isopod starvation, however, have recently been extended due to the story of a captive isopod with what appears to have been a strange eating disorder.  After being successfully transferred to Toba Aquarium, Giant Isopod No. 1 acted normally and feasted on whatever it was fed until Jan. 2, 2009.  It was on this date that No. 1 had its last meal.

A week of starvation went by, then two.  Then a month went by in which No. 1 did not eat.  That month was followed by a second month.  The days and the weeks and the months rolled by and the isopod never ingested any food until Feb. 14, 2014.   No. 1 finally gave up and died after not eating for a total of 1,868 days.  The caretakers and scientists at Toba Aquarium performed an autopsy to determine if there were any obvious causes for this self-inflicted starvation but found none.  It appeared that the giant isopod successfully starved itself to death.

While this is perhaps one of the most bizarre and sensational instances of a non-human with an eating disorder, it is not the only one.  There are many documented cases of domesticated animals such as dogs and cats that exhibit a wide range of irregular and detrimental eating behaviors.  Many of these are the same disorders seen in humans.  Dogs and cats are, not surprisingly, some of the leading animals to be diagnosed with strange eating habits.  They may be diagnosed with anorexia, pica, and coprophagia.

Other animals also have their own types of eating disorders.  Pigs exhibit a disorder similar to anorexia.  Thin sow syndrome occurs in female pigs.  This is an eating problem where the female pig does not eat enough and continually loses body weight.  A sow with this disease may end up starving herself to death.

Rats, specifically those in laboratories, may be at risk for activity anorexia.  This tends to occur when the lab animals are given specific and limited mealtimes with unrestricted access to an exercise wheel.  The animals will begin exercising more and eating less.  This happens to such a great extent that the rats end up starving themselves to death.  Scientists are studying this phenomenon to determine why the rats end up eating less even as they get more exercise and lose weight.

Perhaps with a breakthrough in these cases and similar ones, scientists will discover why humans also have a propensity towards these detrimental behaviors.  The story of the giant isopod dying of starvation is just one example of extreme eating disorders running rampant through the world today.  Studies and treatments will continue.  The goal is, of course, for scientists and medical professionals to have a better understanding of why these unusual illnesses occur.  The knowledge gained may one day suggest treatments for anyone suffering from these conditions.

2 Responses to "Eating Disorders and Isopods; A Starvation Story"