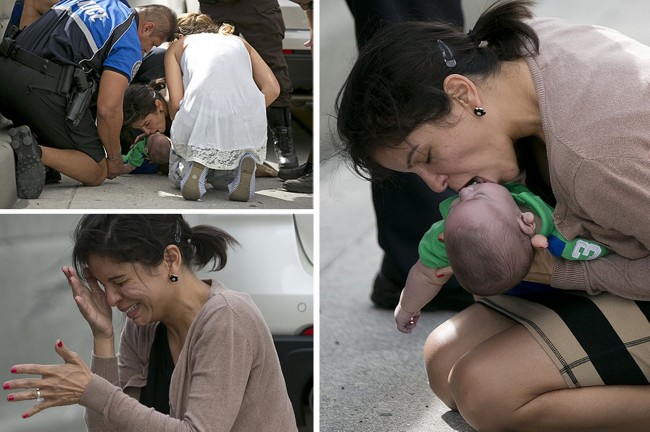 In a dramatic rescue, several motorists – including a police officer and a mother who had been trained in pediatric cardiopulmonary resuscitation – saved the life of a baby on Florida’s 15-mile Dolphin Expressway on Thursday. The five-month-old baby, Sebastian de la Cruz was traveling with his aunt Pamela Rauseo who pulled over to the side of the road, east of the 57th Avenue exit, and screamed for help before setting the baby down on the tarmac to perform CPR. Baby Sebastian is said to be alive and out of danger for now, although doctors indicated the reason for the sudden episode that nearly claimed his life “needed further investigation.”

Pamela Rauseo was assisted by Lucila Godoy – the mother of a 3-year-old boy – who was on her way to Miami, but pulled over to help when she heard Rauseo’s screams and pleas for assistance. The women knelt on the tarmac to quickly administer CPR and were joined by police officer Amauris Bastidas of Sweetwater, Florida, who continued CPR until baby Sebastian was revived. Photographer Al Diaz from the Miami Herald was on the scene to document the rescue in pictures, capturing some of the moments he described as “frozen in my mind.” He quickly found Bastidas and returned to the scene to help. By the time Diaz arrived on scene, there were several people available for assistance. Pamela Rauseo later revealed that she heard the baby suddenly stop crying and turning blue, due to a lack of oxygen. Her prompt attempts at resuscitation, after she pulled off the Florida expressway, probably saved baby Sebastian’s life.

Unfortunately, baby Sebastian was not out of danger, even after CPR. After officer Bastidas lifted the baby into the air and moved him around, the baby began crying. “I lifted him up in the air and moved him up and down and he started breathing and crying. Then he stopped breathing again.” Bastidas said. After another round of chest compressions and mouth-to-mouth resuscitation, the baby began to show signs of consistent breathing until more help arrived.

Two members of the hazardous materials unit of the Miami-Dade Fire Rescue unit, Captain Anthony Trim and Lieutenant Alvaro, had been stuck in a traffic snarl when they heard the emergency call and noticed the crowd gathered around baby Sebastian. Rauseo, Godoy and Bastidas handed the baby over to Lieutenant Tonanez who ensured the infant’s airway remained unobstructed, before rushing him to the pediatric unit at Miami’s Jackson Memorial Hospital, about five and a half miles away. Rauseo, who is from West Kendall, Florida, later confirmed that the baby’s condition was stable and that he would remain under observation in order to determine the root cause of the episode. Later in the day, photographer Al Diaz would tweet about the good Samaritans who had teamed up off a Florida expressway to save baby Sebastian de la Cruz’s life. Amid the Westbound traffic snarl, the combination of an aunt, a mother, a police officer, and two rescue officers did all that they could to save the life of a five-month-old baby—and succeeded.