Gay Marriage Battle a Matter of State to State Combat 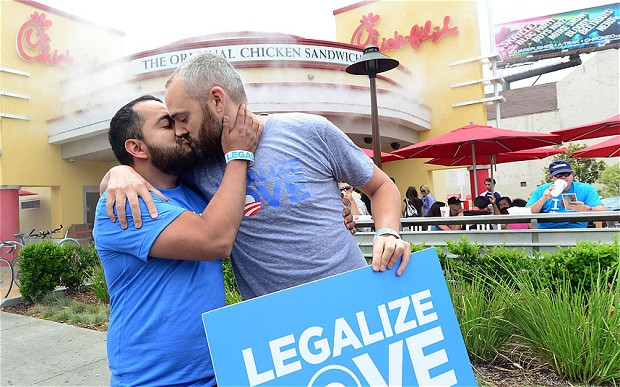 The historic ruling back in June accomplished two important things. First, it ruled that same-sex couples who were married in states that had legalized lesbian and gay marriage were entitled to the same rights at the federal level as any other married couple. Secondly, it ruled that Proposition 8, the law banning same-sex marriage in California, was unconstitutional.

Although the ruling signaled a somewhat surprisingly strong inclination of the Court to support lesbian and gay rights, if fell short of a sweeping ruling that would have simply made laws banning such marriages unconstitutional. That moved the political action to the states.

Right now, the score is 17 states with legalized same-sex marriage  to 33 with bans against it. Currently, there are 47 lawsuits pending in 24 of those states. Of the 17 states where gay marriage is legal, only six states had marriage laws banning same-sex marriages struck down by the courts. The remaining 11 legal states, eight enacted their marriage equality statues through the legislature, and three did so by popular vote.

The trend toward legalization has led some observers to see something of a landslide of changing attitudes. While it is true that public opinion seems to be leaping toward greater acceptance, the actual legal right to same-sex marriage is a battle that must now be fought state by state.

In Virginia, the newly elected Attorney General Mark Herring (D) declined to defend the 2006 amendment to the state constitution. Still, dozens of demonstrators showed up on both sides of the issue when the case was heard at the Norfolk  federal courthouse.

In Wisconsin, another state constitutional amendment is being challenged, but Wisconsin also has a peculiar “marriage evasion law” that makes it illegal to go to another state for the purpose of getting legally married there.

In Utah, the ban on gay marriage was ruled unconstitutional, but the decision was stayed pending appeal. Arguments are scheduled for April. The state now apparently believes they have devised an unassailable argument consisting of basically two parts. The first part of the argument is that marriage has always been between a man and a woman and so that arrangement should continue. The second part of the argument is that children should be raised by their biological parents.

Unfortunately, neither part of the argument is unique or even valid. Both points have been thoroughly  discussed and actually ruled on. While precedent is always important in such cases, the simple fact is that no one can predict how a court will rule or how a ruling will be justified.

As it stands right now, the gay marriage battle is a matter of state by state combat. In the end, it is a kind of combat that may give a stronger, more clearly defined decision. Some states will come along quickly and others will drag their decision out as long as possible. Eventually, as with interracial marriage, when all of the arguments are argued and ruled upon, some grudging consensus will be achieved. And then everyone can move on to the next big issue.

Editorial By Sharon I. Fawley