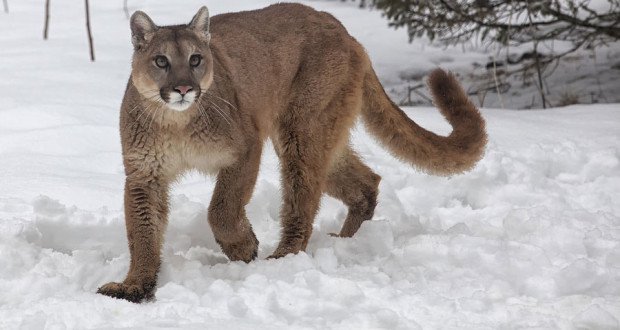 The White family in Twisp, Washington has had more than their share of cougar visits in the last few weeks. After shooing the same cougar away several times, he ran out of luck when he started following 14-year-old Tanner back to the house. His sister, Shelby, shot and killed the cougar when he was just 10 feet away. The girl had a permit and used the rifle to save her brother.

The children’s dad was first alerted to the cougar’s presence at 2:30 a.m. when the family dog was barking. He scared it away, but it returned two hours later. He scared it off again, but the persistent cougar appeared again when the kids came home from school. The youngest boy went right in the house, but Tanner went back out to feed the dog. As he was heading back in the house, the father and the 11-year-old girl noticed the cougar behind him. Their father saw the ordeal unfold before his eyes from the kitchen window. Shelby was quick on her feet, grabbed the rifle and killed the cougar. Had she not been able to put the animal down, her brother may have been attacked.

Officer Carl Treser, with the Department of Fish and Wildlife, said the four-year-old cougar only weighed 50 pounds, which is about half the normal weight for an animal this size. He said the female was “emaciated” and “very, very skinny.” It was the third cougar killed in the area in less than two weeks, according to The Wenatchee World.

On Feb. 13, the youngest White, 9-year-old Cody, shot a cougar. It was about a week before the incident with his sister. He followed tracks to a field they use for calving. He shot it hillside. Treser said that cougar weighed about 120 pounds and that Cody also had a permit.

On Feb. 18, another cougar was killed when a hunter from Puget Sound spotted the young cougar near the White’s driveway. The rural area lends itself well as a home for the cougars.

The family owns a cow ranch, which the cougars have been trying to get to. Officials suspect the cougars are starving to death and looking to the farm for food. Cougars are stealthy predators and are attracted to sheep and cattle. They generally avoid people and cougar attacks are rare. As long as the animals do not feel threatened, they are unlikely to strike. They can be considered sneaky because they like to hide in brush and strike their prey by surprise.

According to the Methow Valley News, 10 cougars have been shot in the area this winter, half of them from wildlife officials and, the other half from hunters. A permit allows one cougar kill. The permits are used as a part of a cougar removal program to prevent cougar attacks.

Though cougar attacks are rare, the girl did not take any chances when she grabbed the rifle, shot and killed the cougar that was hot on her brothers trail. With her decisiveness and quick action, she may very well have saved his life.