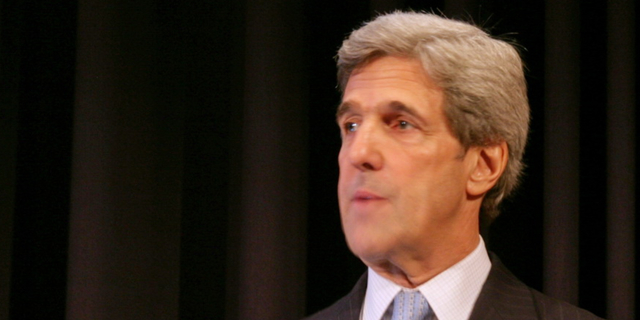 Secretary of State John Kerry scolded skeptics of climate change with comments he made during a speech he gave Sunday while on tour in Jakarta, Indonesia. In his address, he mocked those who claim climate change effects are negligible or non-existent, comparing them to people who believe the earth is flat.

For Kerry, and environmental science researchers across the globe, the reality of climate change is unequivocal. “Those who refuse to believe it,” said Kerry, “are simply burying their heads in the sand.” He continued, driving the point home, “We don’t have time for a meeting anywhere of the Flat Earth Society.”

Ironically, he uses very strong language as the representative of the only major industrialized nation to have failed to ratify the Kyoto protocol, which commits signing nations to reducing their greenhouse gas emissions, and which went into effect in 2005.

Kerry told government officials, local leaders, and students in attendance at the American Cultural Centre event to take their share of responsibility and act without hesitation. He reminded them that their country is on the front line of climate change, and warned that it was not an exaggeration to consider their entire way of life at risk.

Low-lying nations such as Indonesia stand to lose a significant chunk of their land mass if sea levels rise, as most climate scientists find likely, especially if current levels of greenhouse gas emissions remain unchecked. Kerry said the stakes justified the need for governments to accept limits on those emissions, which come largely from factories, power plants and other industrial activities.

John Kerry also scolded those skeptics who support the belief that addressing climate change issues fail a cost/benefit analysis in his comments. This is an argument which is often cited by oil and coal industry proponents, essentially denying that climate change has reached crisis levels or arguing that it is still profitable enough to ignore the issue.

The time sensitivity is much too high to let interest groups with large amounts of resources dedicated to hijacking the conversation, maintains Kerry. Big companies do not what to change their behaviors and they are desperate to avoid the costs they will incur by reducing the risks that their own actions have certainly brought about.

Kerry came to Jakarta after spending Friday reaching an agreement with China for the two countries to cooperate more closely on fighting climate change. By some measurements, the US and China are the world’s two biggest polluters. A recent study on carbon dioxide emission has the United States and China contributing 23 percent and 19 percent, respectively, to world-wide totals. This is significantly higher than any other single nation. They issued a joint-statement Saturday to work together to reduce “greenhouse gases, including reducing vehicle emissions, improving energy efficiency of buildings and other measures.”

While Kerry successfully used his comments to raise awareness in Asia by scolding the more significant examples of climate change skepticism, it remains to be seen if the biggest creators of green house gas emissions on the planet can take these comments to heart. Kerry leaves Indonesia on Monday to visit Abu Dhabi in the United Arab Emirates.