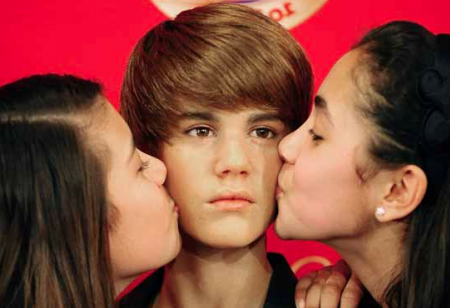 Justin Bieber has been going through meltdown since last year and his wax figure at Madame Tussauds New York, in a case of art imitating life, is going to be melted down as well. Apparently the Bieber replica was done back in the day when the Canadian singer was younger, cuter and less inclined to break the law.

Ironically, this younger version of the 19 year-old pop star is very popular with the clientele of the world famous wax museum. Bieber’s youthful doppelganger is not behind bars, now that would be ironic, nor is it protected from over eager fans who want to get pictures with the waxwork. Selfies and pictures of fans kissing the waxen cheeks has worn down the mop-haired Bieber figure.

It seems that Belieber’s just cannot keep their hands of his image. A source from the wax museum said that with nothing to stop them, literally thousands of fans have had pictures taken with Bieber’s youthful figure. Sadly, according to Madame Tussauds’ staff, Justin has been groped, fondled and just plain old touched so many times he no longer looks like the real thing.

Of course, since the wax work is fashioned as a much younger version of Justin Bieber, it could be argued that the likeness has not looked like the pop star for some time now. The decision to melt down the wax figure does seem to be a case of art imitating life as the real Justin is still undergoing his own personal meltdown.

The manager of the New York Madame Tussauds, Bret Pidgeon, said that the museum was disappointed with the need to remove the current Bieber figure. According to the museum, Beliebers have been pretty rough with the younger version of the singer. Pidgeon told NY Post that after the meltdown they would be replacing the old younger Bieber with an all new “older” version.

Its been a busy week for Bieber in terms of publicity. He has been in the news because of a “joke article” that had LA Clippers star Blake Griffin “smacking” the **** out of Justin at a Starbucks – must be something in the coffee as Starbucks has been in the news for the last three to four days – and news that the singer is very concerned about his fans seeing his genitalia in a “prison video.”

Considering Justin, allegedly, had a picture of his penis stored on his cell phone, that the performer supposedly sent to his former girlfriend Selena Gomez, it is surprising that he would be that concerned. Unless, of course, the terror of being booked and put in jail made his assets shrink? Fear can have the same effect as cold on the male anatomy. Could Justin be afraid that rather than appearing to be a sexy, mighty oak he might just look like an acorn?

It also brings up an interesting question concerning Justin Bieber’s wax figure in Madame Tussauds.The rough handling of the star’s younger wax work is going through its own form of meltdown, aka “art” imitating life and the reason given is that the younger Bieber figure has been excessively damaged. So, the question is, where is the wax Bieber most damaged? Answers on a postcard please.