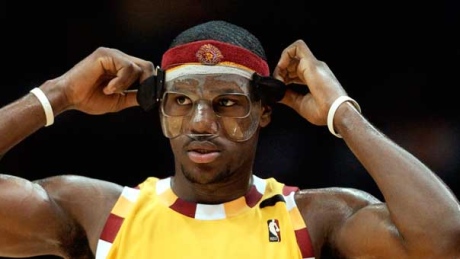 James at the top of the key, he drives with the right and powers it down. However, that is not all she wrote. He caught a hammering elbow to the nose from Surge Ibaka on the finish. The impact of that blow left him curled up on the sidelines bleeding profusely. King James is easily considered one of the toughest guys in the league. Therefore, when he crashes to the deck there is no doubt he will get right back up. Except, this time the effects of that blow was a little more detrimental than expected.  Though, he will not return as he left there is no need to even doubt his abilities. LeBron will still be the same dominating force he always is. The only difference is he’ll have a little more armor on. He will have to “Bane James” on The Knicks, sporting a custom face piece.

LeBron has been fitted for a custom face piece that will be similar to the one he wore in Cleveland. Some might recall that grueling game against The Rockets back in 2004. LeBron was high-speed on the way to the hole and then leveled by Dikembe Mutombo. The elbow Mutombo delivered was a devastating blow that broke LeBron’s left cheekbone. So, it would be safe to say James is accustomed to this face gear. Nonetheless, James insists it is very uncomfortable, and even compares it to a constant defender in his face. Well maybe the initial feeling of discomfort will have subsided due to todays practice. Wednesday is the day he was slated to practice with the new facemask on. Today’s practice should have undoubtedly prepared him for Thursday’s game, because he has been participating in full contact drills. According to, LeBron the intensity level of contact play is challenging, because of everyone’s will to win. Hopefully, will and desire to win will translate to a “W” against The NY Knicks.

James has admitted to reporters that he believes he will begin the game a bit timid but eventually get into the flow of things. That initial apprehension is partially due to the fact that he thinks it is too soon. But, King James is a competitor that will not ever be comfortable on the sidelines inactive. James is the type of player that knows his game and himself enough to handle his limitations on the court. His discipline is the only reason he can return earlier than forecasted. In fact he was seen in practice shooting 3-pointers and reprimanding himself with push-ups after consecutive misses. That may not mean much to most people, but to his teammates that is a sign the King James is back.

Although, The Heat is confident in their courageous leader, they intend on watching him and insuring he improves. Thus far he has not been hit in the nose, and they plan to keep it that way. If everything goes as planned he should be fully recovered in a matter of weeks. But, according to Chris Bosh LeBron’s game is the same, and he can break anything and still perform the same. Apparently that is why he is LeBron James, a competitor beyond abnormal circumstance.

A true competitor never falls; he just kneels for breath, and then gets right back in the fight. LeBron is what most sports analyst would arguably call a true competitor, he never loses his fight. So, he may have been down in Oklahoma, and out in Chicago, but sound the alarm, and alert Carmelo. King James is back and Thursday marks his return.