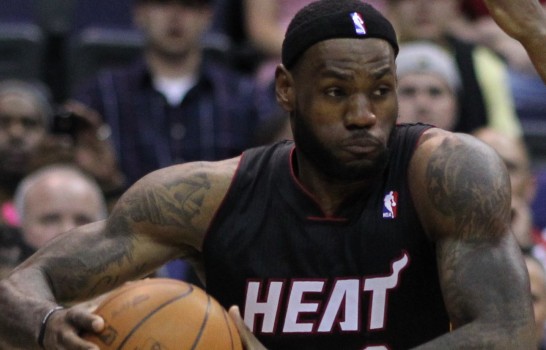 Aside from all the Kevin Durant forerunning for MVP and the Indiana Pacers as the No. 1 team in the league, the Cleveland Cavaliers’ LeBron James is still without question the No. 1 player in the league. Just now, waves of NBA fans and enthusiast just burst out in rage for their personal choices in Durant, Paul George and a host of other potentially deserving players. If one was to take the time to sift through the statistics and the facts, there is a hands-down winner in the raining champion’s star LBJ.

Averaging 26.1 point per game for the 2013-2014 season and a little more (27.5 PPG) for his career, there is no doubt that LeBron is still basketball greatness as one of the most valuable players in the association. Taking those numbers into consideration with an approximate 6-7 rebounds and assist average for both the season and his entire career, it is difficult to dispute against the claim. James is not only a defending champion but is also the league’s defending MVP. Of the first 49 games, the Heat clutch a 35-14 record.

Durant leads the NBA with a 31.2-point average and a 51.2 percent shooting average with 5.5 assists and 1.4 steals to add along without the help of the injured Russell Westbrook, but LeBron has been leading all active players in both categories for the last five years. James was recently interviewed by NBA TV stating that he will finish as one of the top four greatest players to ever play the game; he said the first three were an obvious choice in Jordan, Bird and Magic, adding Oscar Robertson as the leading candidate for the fourth spot at the present time. The highly confident LeBron James is still #1 for most fans even when one considering all the greats, both past and present.

The ballots are still out but voters are rushing in by the numbers as LBJ has been releasing consistent campaigns and exclusive behind the scenes workout videos for fans to gain a closer look into the life of the NBA superstar. A few days ago, LBJ and the rest of the Heat players had just finished practice before LeBron put on a show for the cameras and players with an array of highlight alley-op dunks that impressed and intrigued everyone with hopes that the Superstar forward would make a move towards participating in this year’s dunk contest. One thing is for certain; it would definitely boost James’ MVP votes, as his participation has been a coveted desire by most basketball fans. Heat beat writer and columnist Joseph Goodman posted Monday, via Twitter, stating that someone asked Miami Guard Dwayne Wade how LeBron would do in the dunk contest, before Wade could answer LeBron answered by confidently saying that he would win. Wade is quoted saying that is would be one of the most watched events of the year next to the Grammy’s.

With all the constant challenges and the rising bar of talent steadily entering the NBA, LeBron definitely has a lot of competition to look forward to while his eminence grows immensely with the basketball world watching in awe and anticipating nothing less than greatness from LBJ. Aside from all the talk and new breakout performances in the league, any true basketball fan knows that with his statistics and championships, LeBron James is still the #1 player in the NBA.