Man-Eating Tigers on the Prowl in India 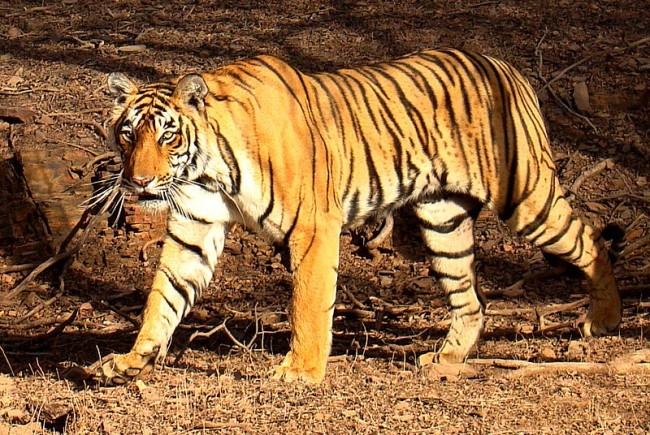 Man-eating tigers are on the prowl in northern India and have killed at least nine people in villages located close to a tiger reserve during the last six weeks.  The most recent attack occurred in Jim Corbett National Park on Sunday morning.  Just the day before, hunters had set up a trap which used a live calf to bait the tiger, dubbed the “Mysterious Queen” by villagers.  The tiger circled the trap but did not attack.

The national park, which dates back to 1936,  is the oldest in India and was established in order to provide a safe refuge for Bengal tigers, who are endangered as a result of unfettered poaching and loss of habitat to development.  Of the approximately 3,200 tigers remaining in the wild today, greater than half live in India.

Although it is suspected that a male tiger is responsible for Sunday’s attack, the eight attacks prior to Sunday’s involved a female tiger.  Sunday’s attack occurred when contract worker Ram Charan, 45, exited his vehicle in a wooded area.  It is speculated that Charan left his car in order to collect firewood or to go to the bathroom in the woods.   The field director of the Jim Corbett National Park, Samir Sinha, reported that although people raced to Charan when they heard his screams, the tiger had already eaten his abdomen and parts of his leg by the time villagers were able to scare it off.

The attack on Charan occurred just three days after the most recent kill by the female tiger, which happened less than ten miles away.  Experts have ruled out the possibility that the female tiger was the one to attack Charan on Sunday because the density of the forest would prevent the female from traveling the distance in just three days.  Those tracking the female tiger say that it has already traveled across a six-lane highway and the Gagan river as well as through villages without being seen.

The first attack, during which a 21-year-old farmer was killed the day before he was to be married, happened on Dec. 29 and caused officials to warn thousands of Indian villagers to stay away from the forests and to be on the lookout for the prowling man-eating tiger.  Staying away from the woods is a difficult task for villagers who do not have toilets and use the forest to relieve themselves.  The deputy director of the park, Saket Badola, has advised people to move in groups.

In order to prevent future attacks, employees of Jim Corbett National Park have installed cameras throughout the area and have set up patrols both on foot and on elephants.  Permits to hunt the endangered animals were granted to six people, but only three hunters showed up to work.  The three who did show up are being hampered in their efforts to kill the tiger because the thick forests hamper their ability to track it.

The last proven tiger attack in this area of India occurred in 2006 when a 13-year-old man-eating female tiger went on the prowl, attacking and killing two people.  According to the Mirror News, a forest worker states that in the case of tigers that begin attacking humans, they are either killed or captured for exhibition in a zoo.

The Times-Picayune
The Star
Mirror News