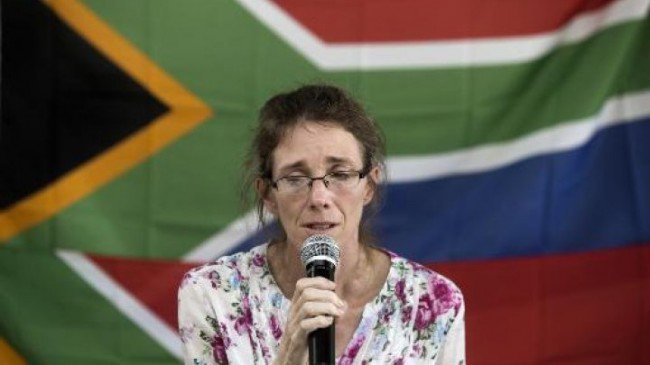 The desperate wife of Pierre Korkie, held hostage by Al-Qaeda militants in Yemen since May last year, has launched a mercy plea for his release on the Internet. His captors have vowed to execute the South African teacher and send his head to his wife in a box if ransom money of three million is not paid by the due date, Saturday February 8. In an emotional video released on YouTube, Yolande Korkie pleaded with Al-Qaeda to release him and not to kill him Saturday.

Pierre and Yolande Korkie were kidnapped in Taiz last May after living in Yemen for four years. She was released unconditionally in January after intense negotiations between the kidnappers and Anas al-Hamati, a skilled negotiator from a South African organization, the Gift of the Givers Foundation.

Al-Hamati went back to Yemen three weeks ago to try to negotiate for Pierre’s release after his captors made threats to behead him if the required ransom money was not paid by January 18. The South African government also sent a representative, the Deputy International Relations Minister, Ebrahim Ebrahim, to Yemen, to plead for his release. The move backfired because the captors believed the government had sent the ransom money, and accused al-Hamati of lying and stealing the cash. Fearing for his life, he left Yemen and negotiations broke down completely.

Al-Hamati was the only person who had managed to gain physical access to the Al-Qaeda militants, and talk to them face to face. He did manage to get a stay of execution for the teacher until tomorrow. However, there has been no contact since he left Yemen, and according to the Gift of the Givers founder, Imtiaz Sooliman, their only possible means of communication was via social media on the internet. Yolande’s emotional mercy plea, recorded by a local newspaper and released to You Tube late yesterday, acknowledges that she knows they are due to kill her husband tomorrow.

Sitting between her son and daughter, her head veiled, she begged her kidnappers to take her husband’s health into consideration, and release him unconditionally, or at least continue the negotiations and extend the deadline for the ransom money to be paid. “We wish to plead with you, please…”

Hoping her plea would make an impact on the internet, she said that Pierre was “an innocent and honest person” – “just an ordinary man from South Africa.” He was extremely sick, she said, and would die if kept captive. She also reiterated what she had said on video previously, that the South African government had not, and would not pay any ransom money.

A South African doctor’s report can be made available to you, should you wish to see it.
Yolande Korkie

In a separate statement issued earlier this week, Sooliman admitted that they could not be sure whether Pierre Korkie was dead or alive at this time. They also had “no indication” of his state of health, and had no way of finding out since the kidnappers kept changing their phone numbers. While they hoped the kidnappers would contact them, they could not be sure whether the lack of communication was due to the kidnappers conviction that Anas al-Hamati had taken ransom money they believed the South African government had delivered to Yemen last month.

He said he was particularly concerned about “other disturbing developments” in the Yemen region, including the recent killing of 20 Yemeni soldiers by Al-Qaeda militants, and the kidnapping of a German citizen in Sana’a, the country’s capital city. It might be due to these that communication had now been “delayed,” he said.

Meanwhile Mrs. Korkie and her children, and all their supporters, are praying that the Al-Qaeda militants will see and listen to her mercy plea on the Internet. An inter-denominational prayer meeting is to be held in Johannesburg this evening where people will pray together for the captured teacher whom Al-Qaeda is due to kill Saturday.

Mercy Plea on the Internet for Teacher Al-Qaeda Due to Kill Saturday [Video] added by Penny Swift on February 7, 2014
View all posts by Penny Swift →