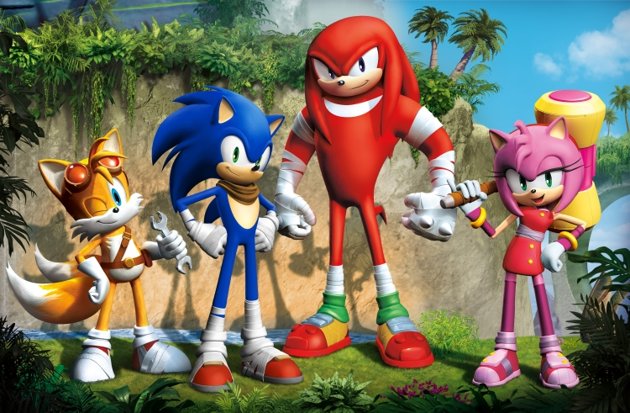 Ever since the collaboration of Sega and Nintendo, many sighed at the mundane releases – until now; Sonic the ever-loving, blue hedgehog is receiving a makeover. Due to the creative hands behind Big Red Button Entertainment, Sonic and friends will be making an appearance on a new game for the Wii U and 3DS. This will be in partnership with Sega, the Sonic Team and Sanzaru Games. Additionally, the Sonic Boom television show will be making a future appearance on the Cartoon Network.

In 1991 the original Sonic the Hedgehog was released by Sega. Eclipsing on fast moving graphics, hills and Sonic’s buds – the game became a cult classic. Sega of America is thrilled with the coming tide of the renewed release of the hedgehog game. Not only will the game bring a sense of nostalgia from adults, but it also reintroduces the lovable and family friendly characters to a whole new generation.

Marcella Churchill, the senior marketing director for Sega shared the company’s excitement. Churchill stated Sonic is a very “viable character.” The presence of the character will extend beyond the load screen of the Wii U and the Nintendo 3DS. The Cartoon Network took an interest in the updated and modern Sonic Boom cartoon series. Joining Sonic for the ride will be his buddies – Tails, Knuckles and counterpart Amy. The characters will remain consistent on the television and within the gameplay, making it a seamless interaction of entertainment.

The updated Sonic game will feature a four-player, split screen play. Creators, OuiDO Productions are thrilled to develop each character with their own distinctive personality. Knuckles will be more than just Sonic’s immediate protege. He will stand apart with a fierce personality while assisting his bud with various missions. Evan Bailey discussed these personalities when it comes to making it come alive on the television screen. Bailey is the executive producer of the TV show. Sonic Boom will be a modernized rendition of the campy character millions knew back in the 1990s. Each character will relate with their viewers, Bailey indicated. The producer states it is an iconic character that while not definitive to formula, will make fans enjoy the character portrayal.

Big Red Button Entertainment showed some hesitation working with what they call the “TV people.” CEO of the company, Bob Rafei stated working with Bailey lead to a pleasant surprise of finding a happy medium of gaming and television. Rafei recalls a moment when he was debating with the Sonic team out of Japan. He states the team denied the need for Sonic the hedgehog to wear pants, whereas he thought it a good idea. Rafei states he was “glad they didn’t go for it,” because the lovable hedgehog just would not be “Sonic with pants on.”

The television series is expected to arrive sometime during late 2014, early 2015 on the Cartoon Network. Sonic Boom will feature character enriched storylines and the kaleidoscope of high impact speed and action, many expect from Sonic and friends. The enriched cartoon will be an equal mix of worlds when it translates to the videogame. Currently, rumors started surfacing Sega may be looking to rollout editions for both PS4 and the Xbox One.  This could be why the Japanese company handed the creative baton to the United States over keeping it locally. In addition, rumors suggest the Cartoon Network slated show will not be making an appearance on Japan television sets. As time nears for release, information will be more distinctive.

Sonic the hedgehog is receiving a makeover for his entrance onto the Wii U and 3DS devices. In addition, old fans and new fans of the colorful hedgehog and friends can soon watch Sonic Boom on Cartoon Network. This game is reaching numerous developers and creators and is expected to be nothing short of amazing. Looking forward to the release of the game and show? Share thoughts in the comments.