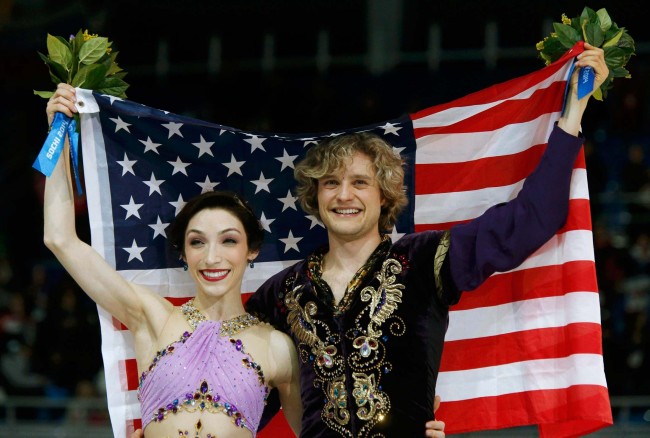 Meryl Davis and Charlie White won the United States’ first gold medal in ice-dancing at the 2014 Sochi Olympic Games, where their nearly flawless performance to the enchanting music from “Sheherazade” earned a total of 195.52, but people are wondering whether there is an off-ice spark between the two. After the couple finished their number, Davis rested her head on White’s back and he kneeled of exhaustion. The young pair crowned 17 years of hard work with one medal of each color: bronze and gold during Sochi Olympics and silver during 2010’s Games in Vancouver.

Davis and White won ahead of the 2010 champions, Canada’s Tessa Virtue and Scott Moir and Russia’s Elena Ilinyka and Nikita Katsalapov. The winning team grew up together in Michigan and spent 17 years training for the test of their lifetime, the 2014 Sochi Olympic Games. After making history, White kneeled and Davis put her head on his back, thus causing people all over the world to question whether the U.S.’s new champions have an off-ice spark.

Although the two stated that they lived their whole lives together and their mothers stand side by side watching their performances, they also added that there is nothing more than a beautiful friendship between them, so there is no off-ice spark between America’s sweethearts, Meryl Davis and Charlie White.

“As an ice dancer, we take our on-ice relationships so seriously, and that’s really the way we like to go about it,” White said.

They may be only 26 (White) and 27 (Davis) years old, but the power couple knows how to get into character and “portray people who are in love.” They admit to having a great relationship, but they were never romantically involved.

White’s girlfriend is Tanith Belbin, a former ice dancer who, along with partner Ben Agosto won a silver medal at the 2006 Olympics. In 2010, the two on-ice couples competed together, but while Belbin occupied the second place, Davis and White got fourth. After the 2010 Olympics, Belbin transitioned into broadcasting and even hosted ABC’s Skating With the Stars.

The former ice dancer moved to attend school in Michigan to be closer to White, who is currently attending the University of Michigan. Belbin told the press that when her boyfriend is busy with the trainings, she spends time with her dog and enjoys cooking. However, when it comes to his performance, she confessed she is nervous whenever she sees him skate.

“I want them to succeed,” Belbin said, referring to the pair that just won the United States’ first gold medal in ice-dancing.

There may not be any off-ice spark between Meryl Davis and Charlie White, but they share the same feelings with regard to the future after Sochi. The champions’ coach, Marina Zoueva stated that the pair keeps “setting the bar higher, higher, higher.”

Now, after 17 years of practice and a gold medal later, the two are finally going on separate ways and Davis admitted during a pre-Olympics teleconference that they would gladly appear on Dancing With the Stars, since Derek Hough handled their Olympic routine.

Meryl Davis and Charlie White huddled with each other one last time before the most important performance of their lives and, although they stated there is no off-ice spark between them, they remain close friends.