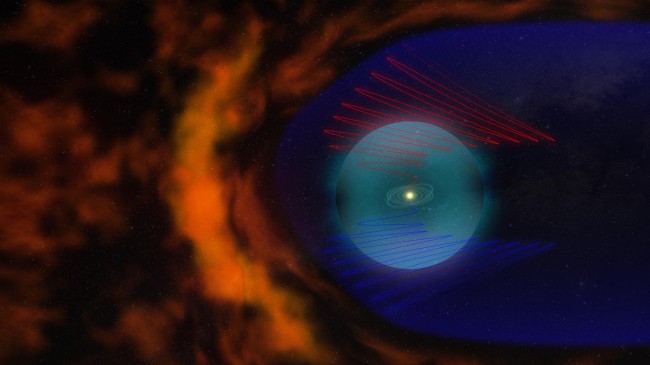 NASA obtains new information about galactic magnetic field after comparing notes between observatories on Earth and the Interstellar Boundary Explorer (IBEX) craft regarding the direction of incoming high energy cosmic rays as they come into contact with solar winds. The direction of the rays was found to be consistent between the measurements provided by IBEX and earlier Voyager missions, allowing scientists to determine the direction of the magnetic field around our solar system. The information is needed to determine the effects the field may have on the heliosphere, which is the boundary of the area in which particles cast off by the Sun protect us from cosmic rays and radiation. The heliosphere has been the topic of intense scrutiny since the 1950’s when the effects of particles from the Sun were beginning to be more widely noted beyond tales of strange lights in the northern and southern night skies. Better understanding of the fields will allow for more finely controlled navigation through the depths of space.

The IBEX craft returned the data used in this latest study in 2009, until then the only hard information on the heliosphere was provided by Voyager 1 when it reached the inner edge of the boundary of the heliosphere in 2004, and from Voyager 2 when it reached the same area in 2007. The IBEX noted the interactions between incoming particles and the lines of magnetic influence to determine which way the fields were concentrated. By measuring areas where charged particles were losing electrons and neutral ions were most highly concentrated, the bands of electromagnetic energy could be identified and mapped. As electrons were snatched from charged particles, the now neutral atoms would zip off in a straight line, the point where their path changed being the location of the field. The outer edge of the heliosphere is noted by incoming particles suddenly slowing as they strain to get through the band of energy created by the particles streaming from the Sun along constant solar winds. As NASA obtains new information our about galactic magnetic field we have a better understanding of how things work beyond the space we normally see, and work every closer to the workings of our universe.

Although the new information provided by the IBEX has enlightened scientists on a number of issues regarding the edge of our solar system, there are many more questions to be answered. For example, there is still the puzzling fact that the Sun does not seem to be sending out equal streams of particles in every direction, raising concerns that certain portions of the Earths orbit may expose us to higher levels of cosmic radiation. As well, the measurements provided by the Voyager probes is not an exact match to that provided by IBEX, but NASA researchers think this may be due to a difference in the way the data was collected. The IBEX takes intermittent snapshots of the field, while the earlier probes sent back an averaged measure of the incoming particles. Given that even after NASA obtains new information about galactic magnetic fields there are still questions to be answered, there is very little chance that the universe will give up all of its secrets easily.