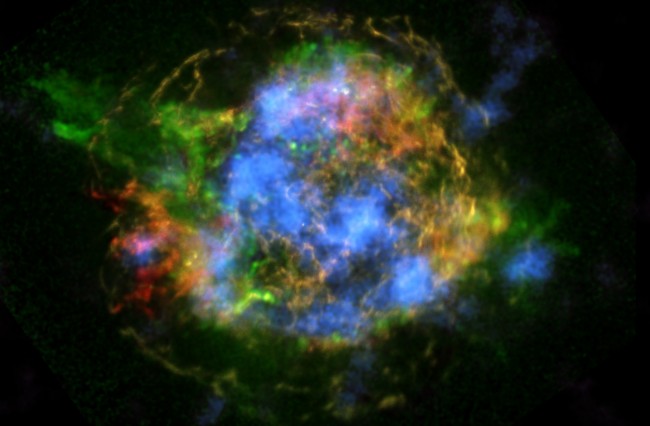 NASA’s Nuclear Spectroscopic Telescope Array, dubbed “NuSTAR” for short has helped show to NASA and now the world through a detailed simulation, the process a star goes through when it turns into a supernova and explodes. The video demonstration of the event was constructed by using data obtained from a remnant called “Cassiopeia A” (Cas A). The video simulation also suggests that supernovas slosh around before their conclusive destruction occurs.

NASA’s NuStar is the first telescope of its kind that is able to produce full maps composed of radioactive elements, which are found in supernova remains. The data that has been received was actually the result of a large star blowing up a long time ago. In fact, the light that reached Earth from the explosion only got here a few hundred years ago and what NASA is observing today is the remains of the star from when it was young. Essentially, NASA and NuSTAR are looking backwards in time.

The exciting thing about NuSTAR, is that with its simulations such as the one as the star exploding, NASA has more forensic tools than ever to investigate such occurrences when they happen (or at least when the light reaches Earth). Before NuSTAR became available, NASA had to rely on materials that were only visible in X-rays after they had been heated up. With NuSTAR’s ability to view radioactive materials through X-rays without heat having to be added first, materials are not only easier to view; they also gives much more thorough and conclusive results.

This stunning new information about the resulting explosion displayed thanks to NuSTAR and its impact on visualizing radioactive materials came after NASA hosted a media teleconference about supernovas earlier today. Live audio and visual streaming of the event was available and many of the graphics displayed at the conference are now publicly available on NASA’s website.

Previously, NuSTAR has provided stunning visuals of a dead star that has been nicknamed the “Hand of God.” It has also shown black holes in the distance, which were buried within dust blankets. The telescope array was launched into space on June 13, 2012 with the mission of observing black holes, stars that are either dead or exploded and other objects far away within the Milky Way galaxy and even beyond. As this most recent display has shown, the telescope is succeeding on its mission.

The NuStar simulation from NASA that shows a star exploding does more than just show off the beauty of a cosmic explosion. It also gives new information about how it is believed stars explode into supernovas and then seed the universe with elements such as gold and iron. The video shows a small circular shape rapidly expand and change its colors before becoming a three-dimensional bumpy object. This is what it looks like, but of course what is actually being simulated is the supernova explosion taking place. The earlier parts of the video present the “sloshing” aspect before explosion happens. Of course, it is one thing to read about it but another to watch, witness  and develop conclusions.