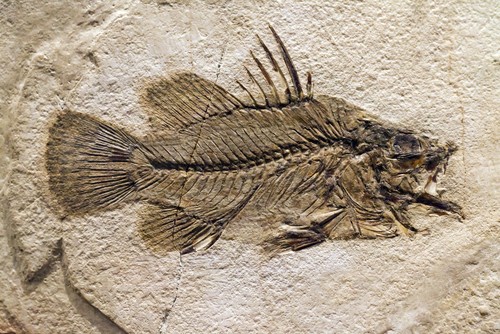 A group of French and Swedish researchers believe they have evidence that could explain the origins of the human face. Using special imaging techniques, the team have conducted a thorough investigation of fossilized specimen that belonged to armored fish, called Romundina, that swam the oceans some 410 million years ago. The latest study was published in the Feb. 12 issue of the journal Nature, entitled A Primitive Placoderm Sheds Light on the Origin of the Jawed Vertebrate Face.

Vertebrates are either jawed or jawless. Most vertebrates possess jaws that are bony or cartilaginous, comprising of an upper and a lower jaw and, today, the only jawless vertebrates include lampreys (a.k.a lamprey eels) and hagfish. Lampreys have a toothed sucking mouth, capable of tearing into the flesh of other fish before sucking their blood; generally, however, lampreys are not parasitic and behave as filter feeders. Hagfish are eel-shaped, just like lampreys, and paddle through water using their long tails. Unlike Gnathostomata – vertebrates that possess jaws – hagfish bear a pair of structures that are lined with tooth-like projections, designed to pull off its sustenance.

Meanwhile, there are over fifty thousand species of known jawed vertebrates, including human beings. Jawed vertebrates evolved from jawless vertebrates, during a period that radically altered the facial structure of a number of species.

In the embryos of jawless vertebrates, sections of tissue begin to grow forwards, at either side of the nascent face, just anterior of the brain. As the these blocks of tissue grow further outwards, they eventually meet at the midline to form an upper lip, with a single nostril that lies between the creature’s eyes. In contrast, during the embryonic development of jawed vertebrates, the afore-mentioned tissue grows forward in the midline, just underneath the brain, thereby pushing between the left and right nasal sacs to form two nostrils. In addition, in jawed vertebrates, the front region of the brain is much longer than in jawless vertebrates; as a consequence, the nose is located at the front of the face, rather than between the eyes.

Relatively little was known about the transition from jawless vertebrates to jawed vertebrates, with the mechanism proving somewhat elusive. However, a team of scientists now believe they have found evidence that highlight a step-by-step change in the skull of Romundina. The fossilized remains of the primitive fish were recovered from the Canadian Arctic, and remain part of a collection at the French National Natural History Museum in Paris.

Romundina was roughly eight inches in length, had a defensive spine that extended along its back, along with a jaw that consisted of two flat plates, capable of crushing food. Thriving around the Silurian and Devonian periods, the invertebrate creatures were protected by a form of armor and had fins and a flexible tail.

One of the lead authors of the study, Vincent Dupret of Uppsala University, recently explained that the facial structure of Romundina is a blend of “primitive and modern features.” On this basis, Dupret believes that the fossils from Romundina samples represent invaluable intermediate fossils, providing researchers with critical insight into the evolution between jawless and jawed invertebrates.

The group imaged the fossilized remains and successfully determined the internal structure of the skull, using a technique called micron resolution X-ray imaging, at the European Synchrotron (ESRF) in Grenoble, France. The authors then digitally reconstructed the 3-dimensional anatomy of the sample, from which they were able to demonstrate that the fossilized creature’s skull would have housed a brain with a relatively short forebrain. The group consider the Romundina skull would have been similar to that seen within jawless invertebrates, with the creature possessing an unusual upper lip that protruded forward, just in front of its nose. Peter Ahlberg, of Uppsala University, recently summarized the team’s interpretation of the studied specimen:

“In effect, Romundina has the construction of a jawed vertebrate but the proportions of a jawless one… This shows us that the organization of the major tissue blocks was the first thing to change, and that the shape of the head caught up afterwards.”

After imaging the Romundina fossil, the researchers compared its anatomy to other creatures and concluded the transition in facial structure, between jawless and jawed vertebrates, was a three-fold process. Firstly, the jaw evolved, along with left and right nostrils and a solid floor underneath the brain. The Romundina represented the second stage of the process, where the upper lip shrank and the nose became positioned just above the jaw. During the final step, the forebrain and the face then lengthened.

Talking to Reuters, Dupret claimed it was like, “looking at yourself in the mirror, but with a 415-million-year-old image.”