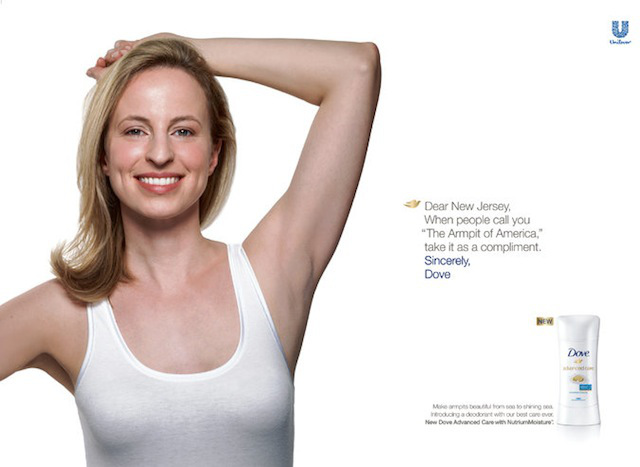 New Jersey has a new hurdle to get over after the reveal of a billboard to promote Dove’s armpit campaign. The billboard shows a woman in a white tank top raising her arm to reveal her armpit and shows a letter to New Jersey residents. The letter that is addressed to the residents of New Jersey says that when people call them the armpit of America, they should take it as a compliment, and ends the letter with sincerely, Dove. The campaign itself is meant to remove the negative connection to the word armpit. Despite the background for the campaign, New Jerseyans got a bad smell from it when they viewed the campaign negatively.

Jen Drexler, the senior vice president for the Insight Strategy Group and author of What She’s Not Telling You, said that the campaign is unnecessary and is giving New Jersey a kick in the back when it is down. Drexler also says that the company should give them a break. She also says that the campaign is giving women another thing to be anxious about, that women do not think about their underarm’s gorgeous appearance and that they could not choose their underarms from a line up. She continues with saying that Dove is taking a classic approach that other beauty products take by saying that they have invented a problem and are now offering a solution to it. Drexler also comments on the New Jersey billboard by saying it was a backhand compliment and that after the state’s recent bridge scandal as well as Hurricane Sandy they are not in the mood for a punch line.

Matthew McCarthy, the senior marketing director for both antiperspirants and deodorants at Unilever, the company that owns Dove, said that women do not see the skin on their armpits in the same way they view the skin on the rest of their body. McCarthy continues by saying that women think of wetness and odor when they think of their armpit. Nancy Vaznonis, who handled the campaign and is the creative director for the advertisement agency, Ogilvy and Mather’s Chicago office, said that the idea was a conscious decision because people view the word armpit as dirty. She wanted to use the campaign to change that conception.

McCarthy says that he does not think there will be a lot of people who misunderstand the campaign and that the company will be open about what the campaign is trying to say for those who do take it to another degree. He continues by saying that the message they are trying to get out is that the armpit is not a bad thing and that Dove stands for caring for the armpit.

Some New Jerseyans are not taking the new Dove campaign well after they got a bad smell from the campaign by calling it insulting and a backhand compliment. Others ask for Jersey girls to be left alone and that the state should be given a break. The campaign is meant to change the way people view armpits. Dove wants people to not associate them with dirt or sweat. The billboard will also be printed in magazines along with other letters to armpits and the campaign will run commercials on the armpit campaign. The billboard is set to make its controversial debut in July.