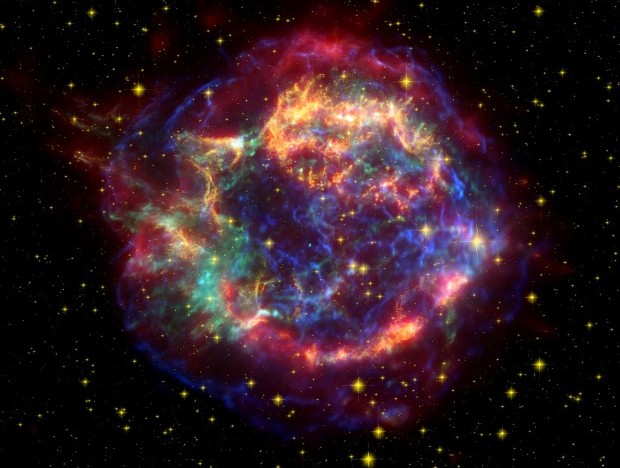 Supernovas are the universe’s martyrs: in dying a spectacularly violent death, supernovas pepper the universe with the building block elements within everything from planets to plants to people and even power tools. Though brilliant enough to briefly outshine entire galaxies, supernovas or the explosive death of a giant star has evaded scientific understanding. Until NASA developed its ground breaking Nuclear Spectroscopic Telescope Array (NuSTAR). Scientists can now grasp what takes place at the time of a star’s death because NASA’s NuSTAR has simulated the death of a star from its stellar corpse named Cassiopeia A (Cas A in short).

A high-energy X-ray observatory, NuSTAR has given scientists a glimpse into the radioactive elements that are present in a supernova’s remnants. This unique map that charts the radioactive elements is a huge step towards understanding the mechanics that trigger the sudden collapse and following explosion of massive stars. The supernova remnant NuSTAR explored with its X-ray vision is located in the Cassiopeia constellation, around 11,000 light-years away from us. The results have revealed how dying stars are ripped apart by extremely powerful shock waves.

Fiona Harrison, the principal investigator of NuSTAR at the California Institute of Technology (CalTech) in Pasadena, explains that it is a misconception that when stars die and explode, the explosion resembles a uniform ball of great power expanding outward. Results from the NuSTAR display how the heart or engine of the explosion is actually distorted. This is possibly due to the inner regions literally sloshing around before the explosion occurs. The activity is similar to the way water comes to a boil.

Cas A, the dense stellar corpse, was left behind when a massive star, several times the size of our sun, detonated. The interesting things about stars is that the bigger, they are the faster they burn out and die. Whereas smaller stars like our sun led far less exciting lives. The bigger stars die young because they use up their hydrogen faster to fuel their shine, which is a million times brighter than our sun. The big stars head towards their supernova stages by turning to successively heavier elements within them to satisfy their requirement for energy. Starting from hydrogen, big stars move to helium, then carbon is converted into oxygen and so on. Every succession to a heavier element for atomic fuel produces lesser and lesser energy. These stars, which have a lifespan of 10 million years, spend their last few days converting Silicon into Iron.

NASA’s NuSTAR is the first space telescope to create maps of the radioactive elements within a stellar corpse and aid in the simulation of a star’s death. Particularly in Cas A, the radioactive element present has been revealed to be Titanium -44 with its unstable nucleus produced at the exploding star’s core. The NuSTAR map reveals Titanium-44 in the center of Cas A’s remnants and the radioactive element is seen in concentrated clumps. The light emanating from the supernova that created Cas A has been estimated to have reached Earth a few centuries ago. Ever since it arrived into our planet, it has been assimilated, as is all supernova material, into life on Earth.

Computer simulations of a star’s death have in the past revealed the primary shock wave stalling and unsuccessful in ripping the outer layers of the star. NuSTAR’s map shows that the dying star sloshes around, thereby reviving the primary shock wave, which ultimately leads to the supernova. Brian Grefenstette of Caltech, who has co-authored a paper with Fiona Harrison on NuSTAR results in the February issue of Nature, has likened the telescope to the latest forensic equipment in the investigation of a star’s death. Since the material they could see in Cas A glowed under X-rays only when heated, scientists working on the stellar corpse found it difficult to understand what was going on, according to Grefenstette. But now, they have got a clue with the detection of radioactive materials in Cas A, which glowed in X-rays unfailingly. It has given them a fuller picture of the activities going on at the heart of the explosion.

Besides showing the new path towards cracking the mystery behind supernovae, the research has also cast aspersions over previous theories in the field. A popular theory suggests that stars rotate very fast before exploding, because of which they send out gas in narrow streams. These jets in turn triggered the supernova. However, data collected by NuSTAR showed no presence of Titanium-44 (in the case of Cas A) in its jets. The research team at NASA working on NuSTAR is hopeful of further using the stellar corpse Cas A to better simulate the death of a star.