Obesity Cure Could Be Found in Calico Cats 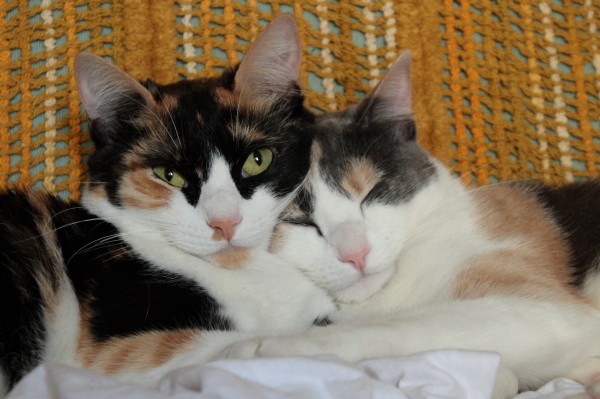 Can Calico cats, the cute and fuzzy couch potato kitties known for sleeping all day, actually help humans figure out how to lose weight? Surprisingly so, according to research presented at the 58th Annual Biophysical Society Meeting held earlier this month in San Francisco. The research team out of the University of California San Francisco explained at the event that the key to finding a cure for obesity could be found in Calico cats due to their unique chromosomal structure.

The distinctive three-toned coloring (orange, black, and white) of Calico cats can be attributed to the inactivation, or “silencing,” of an X chromosome. Calico cells have two copies of the X chromosome, one from each parent. Since each cell only requires one X chromosome, the cells automatically activate one and inactivate the other. This leads to the various splashes of color that Calicos are known for.

Although the reason behind the patchwork patterning may be common knowledge to some, scientists have yet to understand how the cells are actually able to do what they do without affecting the primary DNA sequence. Elizabeth Smith, a member of the University of California anatomy department, discussed her team’s work in a press release posted earlier this month. Smith stated that uncovering how the Calico cells are able to inactivate only one X chromosome could help explain the way genes are inherited. The knowledge could help answer longstanding questions around if and how certain traits, like obesity, are passed from parents to offspring.

Because body fat distribution is also associated with the X chromosome, researchers have high hopes that the cure for hereditary obesity could be found with the help of the cells in Calico cats. By figuring out whether it is possible to control how the human body interacts with each X chromosome, scientists could eventually learn how to silence certain genes, like the ones linked with hereditary obesity. The ultimate question lies with figuring out how many unfavorable genes could be turned off without affecting the DNA sequence.

The race to understand what has become a national health crisis is leading researchers in a number of different directions. Scientists have started learning more about obesity by studying everything from the link between a mother’s diet during pregnancy and the obesity risk in her offspring to whether newborns with hearty appetites are at a higher likelihood of later weight gain.

The latest research into whether the cure for hereditary obesity could be found in Calico cats is still in infant stages and should be considered preliminary until it is published in a peer-reviewed journal. However, scientists seem increasingly encouraged by the impact their findings may have in the fight against the obesity epidemic. Currently, about one-third of adults and children are considered obese, according to the Center for Disease Control. Obesity is believed to contribute to a number of different health risks, including cardiovascular disease, type 2 diabetes, stroke, and certain types of cancer. Health risks associated with obesity are among the leading causes of preventable death. Treatment measures currently include committing to a healthy diet and daily physical exercise.