One Dead Six Hospitalized With Bird Flu in China This Month 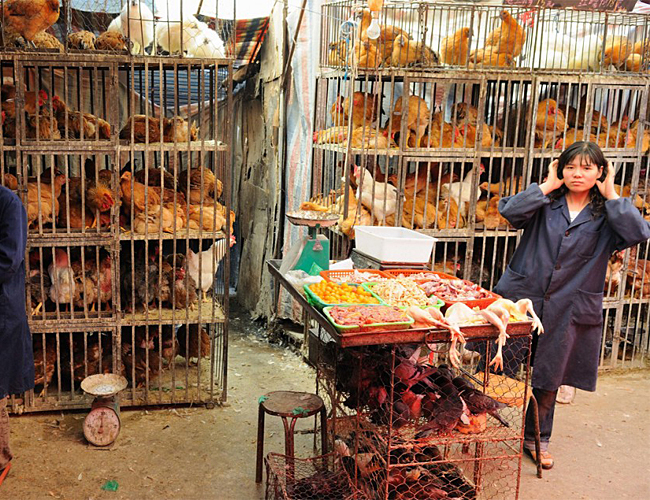 One person is dead and seven have been hospitalized after contracting the bird flu in China this month. Five, including the deceased woman from Shenzhen City in Guangdong Province, are confirmed to have been exposed either to live poultry or markets where live chickens are sold. Three of the patients are in a critical condition, while two are reported to be “severely” affected by the infection. The youngest, an 11-year-old boy, is in stable condition, with what they say is “a mild case” in a hospital in Zhaoqing City, Guangdong Province.

According to the World Health Organization (WHO) all cases have been confirmed as the avian influenza A(H7N9) virus. China’s National Health and Family Planning Commission notified WHO earlier this week about the current state of affairs, stating that the strain had been confirmed in a laboratory. There is no evidence at this stage that the virus was transmitted between humans or from animals, rather it is believed to have come from the infected poultry these people had been in contact with.

Apart from the young boy, all the sick people are men aged between 38 and 68, although most were in their sixties. The woman who died from bird flu in China was 81-years-old; she had been sick for a week prior to her death in the hospital on February 7.

According to WHO, it is unlikely that this strain of avian or bird flu in China will spread internationally, even though it does appear that it has already began spreading via live chickens from mainland China to Hong Kong SAR. Officials at WHO say, in addition to the seven who have already been hospitalized and the one woman who is dead, they expect more people to become infected. The reason for this is typically the trade and transportation of poultry increases during the Lunar New Year, which fell on January 31 last year, even though one may have thought that the prognosis may have already improved by now.

One of the main concerns is whether tourists and those traveling to China on business will be affected by this ongoing outbreak of bird flu. While WHO suggests that anyone visiting the country should be sure to avoid chicken farms, any contact with poultry or animals that are in “live bird markets” as well as anywhere poultry may be slaughtered. Otherwise, there is no reason why they should not visit China. People should be sure to follow the usual  safety and hygiene procedures, particularly those that relate to food.

WHO has not recommended that special screening be done when people enter China and they have not imposed any trade or travel restrictions. They do warn those who have any form of “severe acute respiratory symptoms” to take special precautions and care.

The Government of China is said to be improving its control and surveillance measures. It has reported that it will carry out “risk communication” with members of the pubic and release information relating to this. The government will also be conducting scientific studies and doing all it can to strengthen international communication and collaboration. Treatment and case management will also be reinforced.

One of the biggest issues is live food markets. WHO points out that while the bird flu virus cannot be transmitted through food that has been well-prepared and properly cooked, if animals that are infected with the virus are handled by humans during the slaughter process humans might become infected. Some infections are very severe and result in critical illness, even death; but others are quite mild. Symptoms of bird flu range from regular flu indications, like coughs, sore throat, fever and aching muscles, to more severe respiratory diseases and pneumonia.

WHO points out that bird flu in China has been identified in both birds and humans. It has also been seen in Europe, the Middle East and in Africa. Usually it is the secretions and excretions from birds that are infected that spread the disease to humans. This is thought to be the cause of the infection that struck seven males from China who were hospitalized this month after the current outbreak that also left one person dead.

Sources:
WHO
WHO
Guardian Liberty Voice