Pussy Riot Attacked by Police at Sochi Olympics in Russia 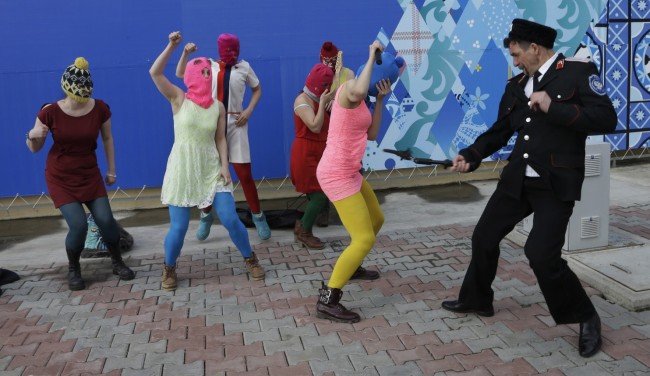 The punk band Pussy Riot was attacked by the police and possibly other authorities in Sochi, Russia on Wednesday, where the winter Olympics are currently taking place. The band, known for its feminist agenda and imprisonment of two of its members for a political performance targeting president Putin in an Orthodox church, was, according to sources, in the process of filming a music video.

What might possibly seem ironic in regards to this matter is that the two previously imprisoned members, Nadezhda Tolokonnikova and Maria Alyokhina, were detained by authorities just a day prior for being suspected of theft at the Hotel Adler in Sochi.

Tolokonnikova’s husband, Petr Verzilov is said to have told local reporters that the women had been pushed to the floor, beaten and met with applied force when refusing to answer questions in the absence of their lawyer, whose said to have been on his way to the police department. Tolokonnikova is said to have later tweeted a message that echo parts of her husband’s statement.

Whether the Pussy Riot ventured off to the Olympic capital of Sochi knowing they would be attacked, or at least, face some opposition by Russian authorities with the eyes of the world present to witness the events does not appear stated; however, it has been reported that they were purposely there to protest and to record the music video, critically directed at president Putin. At least the matter appears to have a lot of attention.

The Russian media have drawn some attention to an image on Olympic snowboarder Alexei Sobolev’s snowboard, which they suspect to be a declaration of support to the Pussy Riot on his behalf, and his response to that is said to have been that anything is possible as he is not the artist. If that is a subtle support, that might be the first protest by an athlete in Olympic history, a Russian news agency reportedly stated.

Founded in August 2011, the Pussy Riot rose to their worldwide fame on February 21, 2012, when they staged a performance at the Cathedral of Christ the Savior in Moscow, Russia, “Punk Prayer – Mother of God, Chase Putin Away!” The Performance was stopped by the cathedral’s security and the several events that followed; trials, convictions and imprisonment of three members, where of two were detained for almost two years, sparked a worldwide movement.

After being freed from prison last December, Tolokonnikova and Alyokhina Performed in New York and are now back in Russia to continue on the path of their cause. They have also spoken out about their experiences behind bars and their stories might be considered to paint a dark image of the Russian penitential system.

The Pussy Riot are probably more known to most people for their often labeled “provocative guerrilla performances” and progressive political agenda rather than their music, and according to several statements, they’re not about to give it any less. Whether there will be further clashes with the police or other authorities in Russia, such as the attacks and events in Sochi, some people might wonder, and also whether this will affect the Olympic games, now, or in the future.