Religious Leaders Pray for Rain Like the Prophet Elijah

By Cherese Jackson on February 2, 20149 Comments 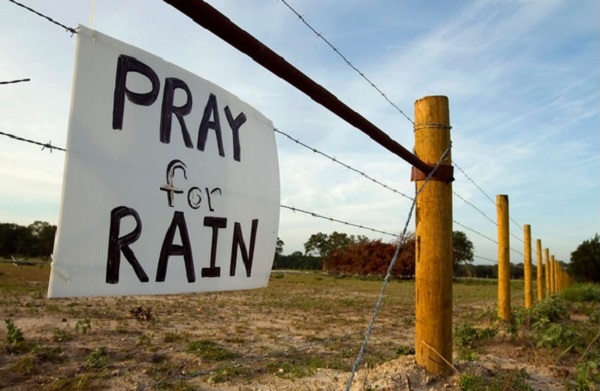 Religious leaders from mixed faiths joined together to pray, as did the prophet Elijah in biblical times, asking God to send rain from heaven. The severe drought invading the West has farmers on edge because of their crops and livestock. This cry to heaven comes after the federal government declared 11 states natural disaster areas.

The states announced by the U.S. Department of Agriculture are New Mexico, Kansas, California, Utah, Hawaii, Colorado, Nevada, Texas, Idaho, California and Oklahoma. These states are on the top of the list in need of an intervention from God, if Mother Nature does not hurry up. California officials said beginning spring 2014 they will not send water to local agencies from the state’s vast reservoir system. This will affect irrigation for one million acres of farmland and drinking water supplies for 25 million people.

Religious leaders gathered on Saturday at a Mormon church located in Reno. On Sunday the Utah Farm Bureau Federation requested the public’s assistance in praying and fasting for rain and snow. A dairy farmer in Utah, Ron Gibson, said they can’t ask the government to help so they decided to try the man upstairs. Gibson said one thing farmers learn is most things that happen in life are totally out of their control.

The hope for these leaders is the same that many of them received from the Holy Scriptures when speaking of the prophet Elijah. In the book of First Kings Elijah prayed that rain would cease and it did for three years. Then Elijah later prayed for rain to fall again. Elijah prayed and prayed for rain to fall but nothing happened. He prayed from the top of the mountain and sent his servant down to see if he saw anything that appeared as if rain was coming. This went on seven times before the servant reported to Elijah that he saw a cloud the size of a man’s hand. Finally, Elijah knew his prayers were answered and he knew rain was on the way.

The prayer event in Nevada was organized by Rajan Zed who said the many faith leaders who participated were sure God would answer in their favor. There were many leaders who joined together from different religious backgrounds such as Jewish, Muslim, Buddhist, Christian, Hindu and Baha’I among others.

Zed said when God sees all these leaders come together in harmony and unity praying for one common goal he is confident that the results will be positive. He said these leaders prayed in diverse traditions, for the common good of the whole community. Zed believes God will naturally be moved to provide relief so that the livelihood, health and quality of life would not be affected for these devotees.

Religious leaders from mixed faiths gathered together in prayer for rain and snow. These leaders petitioned God as did the prophet Elijah during biblical days when Israel experienced a three-year drought. Elijah had to pray seven times before the heavens opened up but his prayer was finally answered.