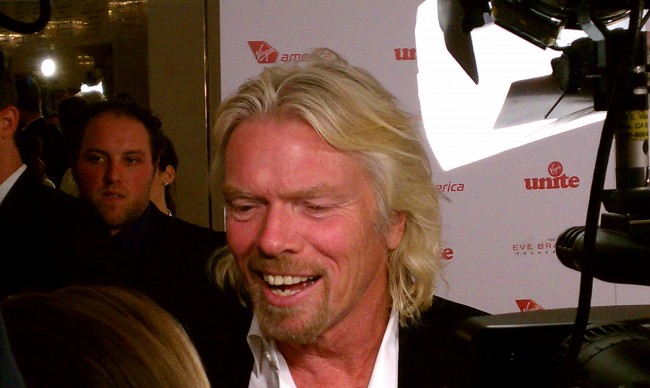 British entrepreneur and founder of Virgin Group Sir Richard Branson has unveiled plans to open a spaceport in the U.A.E within two years. Branson said on a trip to the capital Abu Dhabi that not only were he plans for a space facility in the city making progress, he hoped the first commercial space flight would happen before the end of 2014. The tycoon formed a partnership with government-backed Aabar Investments investors in 2009 when the latter purchased a 35 percent share in Branson’s space venture, Virgin Galactic. The stake is worth $300 million, according to Branson.

The plans are just the latest step in Branson’s plan to make space travel more accessible to the public while reducing long-haul flight times. Branson said his Virgin Galactic service will mean passengers will be able to get from London to Sydney in as little as two hours. Currently, the flight time for this is route is around 22 hours as no airline flies direct between the two cities. For those who can afford it, the fact British entrepreneur and founder of Virgin Group Sir Richard Branson has unveiled plans to open spaceport in the U.A.E within two years is a real statement of intent. It shows that Branson is making space travel his priority and will eventually provide a viable alternative to what is on offer now, especially when it becomes more affordable to the paying public. Although prices have not been revealed, it is understood passengers will pay thousands of dollars to board the aircraft.

Virgin Galactic is the latest in a number of ambitious projects undertaken by Branson. In the 1980s he formed Virgin Atlantic in a bid to break what he described as rival British Airways’ monopoly on UK-US flight routes. He succeeded. However, he did fail in numerous attempts to revive British Airways’ supersonic aircraft Concorde before it was eventually phased out. The reason the planes are no longer used is they are analogue machines in a digital world and the cost of maintaining each aircraft was too expensive.

Now he is taking the industry to a new level by advancing the travel experience to something only generally enjoyed by astronauts. Branson is a big fan of being in the air and has a few failed round-the-world hot air balloon rides on his CV.

In 2006, he took on the might of Rupert Murdoch’s BSkyB pay-TV service with the launch of cable company Virgin Media. However, the latter only produced moderate results and even ended up selling channels to its satellite rival. When Branson launched Virgin Media he became close allies with former Vice President of the United States Al Gore, whose then channel Current TV launched on the cable platform. The channel was subsequently absorbed by Al Jazeera America.

The fact British entrepreneur and founder of Virgin Group Sir Richard Branson has unveiled plans to open spaceport in the U.A.E within two years will prove to be a real boost for passengers who have become disenchanted with long flight times…provided it is affordable.