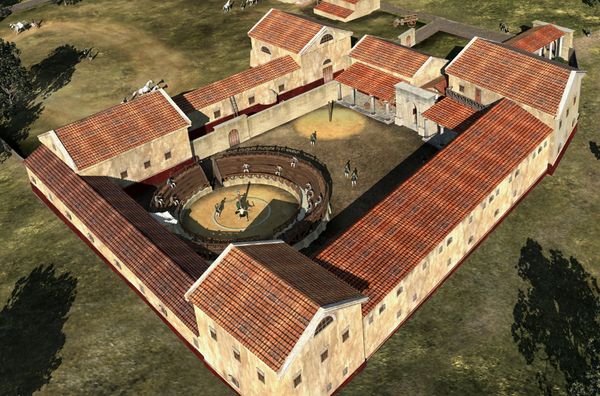 Remote sensing devices were used to detect the gladiator school, rather than the old-fashioned method of excavations. Then, using the data that they collected, the researchers constructed 3D virtual models to recreate what the gladiator center once looked like during the heyday of Rome.

Archaeologists have known about the Carnuntum site and have studied it for over a hundred years, but they had been unaware that it also contained a Roman gladiatorial school.

Carnuntum, located on the southern bank of the Danube River, the archaeologists knew, was in part a Roman military city, though civilians also lived there. Unearthed during prior excavations was also a fortress for legionnaires and an amphitheater.

The Roman gladiatorial school, or ludus, was constructed in the second century, A.D., and spanned over 30,000 square feet in area. The school buildings surrounded a central courtyard.

Wolfgang Neubauer of the University of Vienna was the leader of the research team that discovered the Roman gladiatorial school. According to the researchers, a wooden fence and stands for spectators to view the games from, set upon a stone foundation, would have surrounded the arena. Neubauer said that the gladiators at the school were basically like prisoners, in that they lived in cells and “in a fortress with only one gate out.”

Cell blocks used to house the gladiators who trained and lived at the school were also discovered. The cell blocks were from 32 to 75 square feet in area, and were located in the school’s southern wing. Rome’s flavian amphitheater, according to the researchers, contains cells of a similar design.

The Roman gladiators would have relaxed and eased their sore aching muscles in at the heated bath complex part of the gladiator school. The complex had heated floors, so that the gladiators could train there even during the winter months. The Roman gladiatorial school also had indoor plumbing, an infirmary, and there was a graveyard located nearby. Other rooms, with tiled floors, were likely reserved for the instructors and high-ranking senior gladiators.

Using such techniques as aerial photography, ground-penetrating radar, and magnetometer surveys, the archaeologists discovered the outline of the Roman gladiatorial school. The researchers were able to locate heat-fired clay bricks hidden under the earth by transmitting an electromagnetic field and learning the soil’s magnetism and electrical conductivity.

Though the Roman gladiatorial school was completely mapped by the researchers, it still lies buried in the ground, and a pasture grows above it, concealing the site where Roman gladiators once trained and prepared for what might be the final face-to-face combat of their lives at the highly popular gladiatorial games.

One Response to "Roman Gladiatorial School Discovered in Austria (Video)"