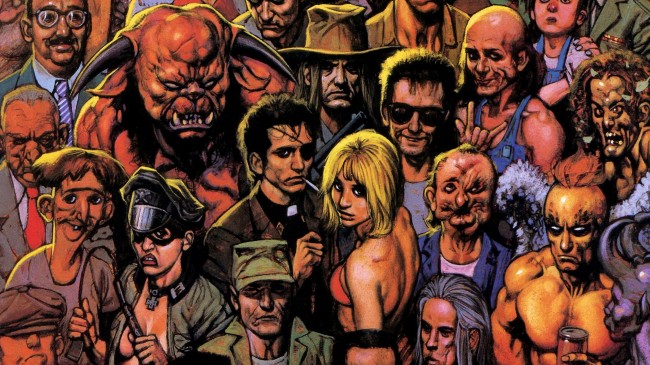 Seth Rogen is making his way back to television. The Canadian funnyman has taken a project that has languished in development hell for well over a decade. Seth Rogen and his writing partner Even Goldberg’s adaptation of Preacher, a violent, dark fantasy graphic novel, has been greenlit by AMC to begin production later this year. AMC wishes for the series to be in the same vein as their other massively successful TV shows, Breaking Bad and The Walking Dead.

Created by Garth Ennis and Steve Dillon back in 1995 for DC Vertigo, Preacher tells the tale of Jesse Cluster. Jesse is a small town Texas preacher who is one day possessed by a wildly powerful supernatural creature named Genesis. The unnatural offspring of an angel and demon, Genesis is composed of both pure evil and pure good with enough power to rival God. The possessed Jesse Cluster teams up with an ex-girlfriend and a hard-drinking Irish vampire in a mission across America to find God after he abandoned Heaven the moment Genesis was born.

Ennis has long felt his material would adapt perfectly from the page to the screen. Before the turn of the millennium, Ennis sold the rights to Electric Entertainment who brought in Rachel Talalay to helm the feature film. Talalay had experience with comic book properties to some extent, having directed 1995’s Tank Girl. The filmmakers, though, soon ran into trouble with financing due to the religious content which many deem to be very controversial. Ennis brought the book to Kevin Smith and his longtime producing partner Scott Mosier in hopes to make the film under their View Askew production company. Smith and Mosier had just started production at the time on their religious comedy, Dogma. Smith, Mosier, and Ennis pitched the project to Bob Weinstein at Miramax, though Weinstein was ultimately confused by the characters and did not want to share in the box office gross with Electric Entertainment.

After Miramax passed, the project soon slipped to the wayside for View Askew. Preacher would bounce around in development hell for several years before UK-based Storm Entertainment came on board to produce the film with Electric Entertainment. In 2001, the feature film adaptation was greenlit with Talalay still directing a script from Ennis. Budgeted at $25 million, filming was to begin in November 2001 before many financial hiccups caused the film a series of delays. While actor James Marsden had been cast in the lead role of Jesse Cluster, the film never seemed to make it out of the pre-production stage.

In 2006, prior to Seth Rogen’s receiving the green light to adapt Preacher, HBO had plans to bring the cult graphic novel to the small screen. The premium cable network hired Mark Steven Johnson (Daredevil, Ghost Rider) and Howard Deutch (Pretty In Pink, Some Kind Of Wonderful) to produce a pilot with Johnson writing and Deutch directing. Johnson had planned on turning each issue of Preacher into a single hour-long episode with the comic book acting as a storyboard. After two years on the project, HBO eventually abandoned the idea, feeling it was too stylistically dark and religiously controversial.

Academy award-winning director Sam Mendes attempted his own adaptation of the cult graphic novel in 2008.  The filmmaker known for American Beauty and Skyfall tried with Columbia Pictures to find a way to bring the twisted comic book to life. As with those that came before him, Mendes had trouble adapting the dark and difficult subject manner into something achievable on a lower budget.

Evan Goldberg and Seth Rogen’s plan to make the series has been a long time coming. The duo began work on the script back in 2007, long before they even had secured any of the property’s rights. The Pineapple Express star has stated several times that series is his all-time favourite comic book. AMC has greenlit Seth Rogen’s adaptation of Preacher with production to begin later this year.