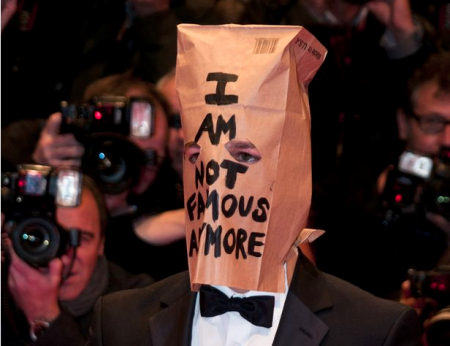 Shia LaBeouf has been having a bit of trouble lately with charges of lacking in the originality department, in Berlin yesterday he did a bit of brown bagging after borrowing material yet again. This time from soccer player Eric Cantona. LaBeouf has been plagued by accusation of plagiarism which he responded to via Twitter only to be called out yet again for using words that were not his own.

The 27 year-old actor/director has been an easy target of late with other folks eager to pick on LaBeouf via Twitter. Issues of plagiarism began in December 2013 when Shia posted his short film Howard Cantour.com and bloggers noticed it was very similar to a Dan Clowes comic released in 2007, Justin M. Damiano . Clowes, the creative genius behind the splendid Ghost World, apparently had no idea that LaBeouf had “borrowed” material from him.

After the allegations, the Transformers star apologized via Twitter and Clowes responded saying he’d never met the actor and could not “imagine what was going through his mind.” Later, more “critics” took pot shots at LaBeouf’s tweeted apology pointing out that he’d apparently cribbed his answer from an old 2010 Yahoo Answers post.

Shia LaBeouf started out doing stand up comedy as a 10 year-old and talked his way into getting an agent when he was not much older. The actor began a promising career and made the transition into film with the 2003 kiddie prison flick Holes. LaBeouf became better known via the television series Even Steven and after appearing in the 2005 Keanu Reeves horror film Constantin, has not returned to the small screen apart from hosting Saturday Night Live occasionally.

It does seem that Shia, whose name means “gift of God” hasn’t gotten the gift of writing his own material, Clowes was not the only person the actor/director borrowed content from. Even before LaBeouf brown bagged the red carpet event of his latest film Nymphomaniac he walked out of the film’s press conference after borrowing more material, this time a line from French soccer star Cantona.

Apparently the actor took umbrage at a question that that could have implied that the amount of sex and nudity in the film put it in porn territory. Although in actuality the question dealt more with whether or not filming the sex scenes in the film were “uncomfortable.” Like a true gentleman, LaBeouf let Stacy Martin answer the question. He then responded with his Cantona quote. The quote was from a 1995 interview with the soccer player who said, in effect, that seagulls only follow a ship if they believe that sardines will be thrown into the sea. After borrowing material from yet another person, Shia thanked the press and left the stage.

The remainder of the film’s stars; big names all, Christian Slater and Uma Thurman being the biggest; were somewhat amused at his departure and Slater joked about a sardine packed script. LaBeouf went on to attend the premiere of the film Nymphomaniac in a black suit and bow tie topped with a paper bag over his head. Eye-holes were cut out of the brown bag and a neatly printed message on the front stated he was not famous anymore.

Shia LaBeouf could be accused of plagiarism and perhaps a lack of originality, but, his brown bagging at the premiere does show a certain flair after all. His borrowing of material, again, can be overlooked especially since he did not take content from another person of letters, but, used an oblique statement from a French soccer player. Perhaps Shia got confused and thought he was doing stand up comedy again or it could be that he is just fed up with all the negative attention he’s been getting. Someone might have asked him about it at the red carpet event if they knew for sure that LaBeouf was really under that brown bag.