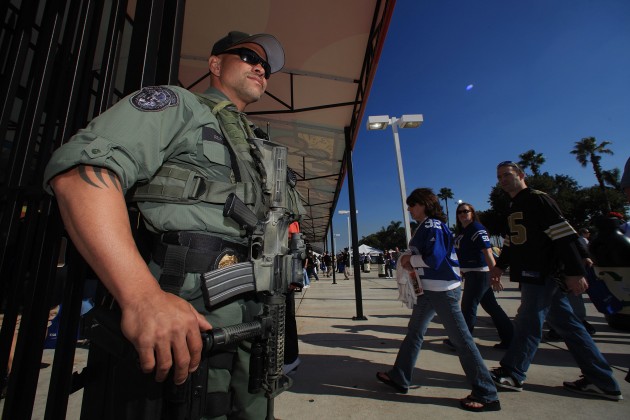 After it had been found that the football stadium hijacker had made it through the Super Bowl gates without a pass, it may be easy to prove taxpayers’ money has been wasted on their multi-million dollar government security ring. Although the NFL has boasted about their high security consisting of helicopters, aid from the TSA, bomb sniffing dogs, cameras, and 700 extra troopers; 30-year-old Matthew Mills made it through five gates and into a press conference to make his appearance in front of millions of people without being stopped.

Mills, a New Jersey journalist, first intentions were to go to the Super Bowl and ask fans outside of the stadium about the significance of the illuminati in the past events. He then saw an employee bus and decided to take the lift. Once he had arrived, only carrying an old pass from a previous event, he made it through five gates. When security was about to stop him, he simply said he was late for work and carried the “I don’t have time to talk” attitude.

Once he had got through, he found the opportunity to get into the press room where the MVP had been speaking. At that moment he grabbed the microphone and stated that 9/11 was “perpetrated by people inside our own government” and insisted that it be investigated. He then quickly drops the microphone and runs off. Security had pulled him aside and took him into a holding area where he was questions. They had asked him who he was and where he had kept his pass. At first Mills lied and said that he was able to get in because he had a ticket to the Super Bowl but his ticket was with his girlfriend and her phone was dead.

They had checked him, confiscated his phone, and found her number. They called her and she had spilled the beans because she was unaware of the situation. Mills had then come clean and explained that he wanted to get a message across to the people through mainstream media, which would not talk about such subjects. Although he is not required to be seen in court, he had been charged with criminal trespassing as well as having been banned from the Metlife Stadium and the NFL for life, and someone will be in contact with him about “security issues”.

Mills is now admired by many, but it also brings up questions on the security ring. Luckily Mills had not been a terrorist, but what if he was? The government had collected money from the people to spend on this very expensive security and a man with no ticket or pass had hopped an employee bus, made it through five gates, and snuck inside of the conference room. How is it that with all this security, nobody had interfered with Mills getting into the Super Bowl? It is hard to say if the government really can keep us protected considering the hijacker had made it past millions of dollars of taxpayers wasted money on the Super Bowl Security.