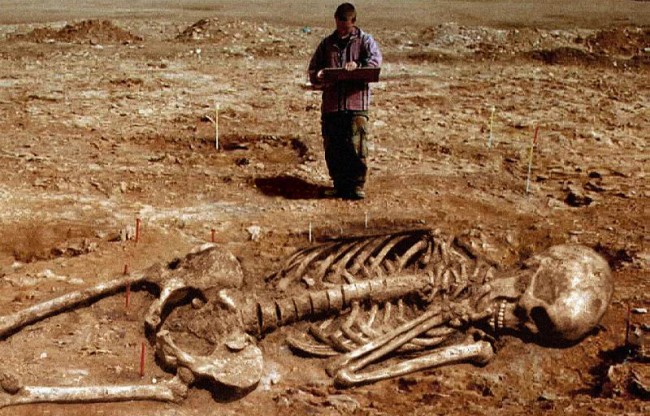 It is unknown why scientists have remained silent about the discovery of 18 giant human skeletons which were found in burial grounds in the state of Wisconsin back in May of 1912. They were in mounds next to Lake Delavan, Wisconsin. The excavation site was supervised by Beloit College. The allegedly massive size of the skeletons and lengthened skulls did not fit into any scientific concept that was in textbooks of the day. They were massive and not believed to be any type of normal human beings.

These alleged findings were first reported on May 4, 1912. It stated that these skeletons had heights which ranged from 7.6 feet up to 10 feet and the skulls were much bigger than the heads of any type of person who lived inside America today. The story also said the skulls had double rows of teeth, six toes on each foot and six fingers on each hand. It was also reported that these bones were believed to belong to beings that could have even been aliens.

Since that time, there have been at least 200 digs that claims other “giants” have been discovered. However, such finds have failed to make the news since around the 1950’s for the most part. It seems that the majority of people just do not believe in this type of thing, because it sounds like complete nonsense. However photographs have been taken to record the finds as the picture with this article shows.

In 2002, National Geographic did a report on 12 skeletons that were supposedly discovered in Greece. They were measured at heights between 12 to 15 feet tall. Was this as well as the find in Wisconsin some kind of joke? People trying to get attention for the press? The truth is no one knows the answer. The find in Wisconsin was only one of many dozens of finds that have been reported in national and local newspapers from all the way back in 1850 moving forward to today. Those were not even the first set of skeleton giants discovered in Wisconsin.

In August of 1891, it was reported that scientists from the Smithsonian Institution had found numerous pyramids shaped burial mounds near Madison, Wisconsin. The excavators discovered an elaborate old time fort which they called Aztalan. Around it, they discovered the skeleton of a man who was called a “giant”. The bones were said to allegedly measure over nine feet long and were well preserved.

If scientists from the Smithsonian Institution actually found giant size skeletons, why are they not on display?  Some conspiracy theorists say that Smithsonian Institution has been actually accused of making an effort to keep the giant skeletons their scientists found locked away somewhere. They say that today’s archaeology and anthropology want to seal the door on the true past, stopping any interpretation of the North American past as bereft of anything unusual.

When looking for actual scientific knowledge over this subject, there is basically nothing on the subject that is discussed. On the day that a scientist debates a creationist at a museum, it would be interesting to know what the scientific side to this story is. Updates will follow if and when found. It is unknown why scientists have continued to remain silent about the discovery of giant human skeletons.