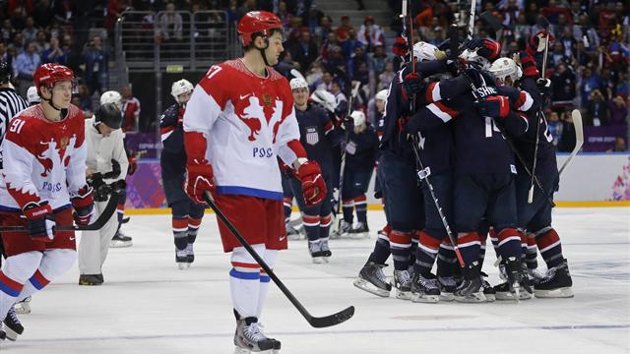 On Saturday, Team USA beat Russia in hockey in a thrilling eight-round shootout in the most streamed hockey game in history. Forward T.J. Oshie was one of the heroes of the game, scoring on four of his six shootout attempts. Goaltender Jonathan Quick also supplied heroics of his own, blocking 29 shots.

The game wasn’t a medal-round game, but both Team USA and Russia played as if it was one. According to Chris Collingsworth on the game: “It was fantastic. It was beyond that.”

Collingsworth added that if the two teams meet again during the Sochi Olympics, “America will shut down to watch that. That was as good as you could get.”

Highlights of the Team USA hockey victory against Russia aired on Saturday night in primetime on NBC, while the game in its entirety will have an encore airing on NBC on Sunday, on NBCSN at 4:30 p.m. ET.

How many people live streamed the Team USA hockey game against Russia?

The Team USA hockey victory against Russia was live streamed by 598, 552 people, surpassing all of the previous matchups of the Vancouver Games and even the then record-setting NBC Stanley Cup Final of 2014.

The Team USA hockey game versus Russia was played fairly evenly throughout 65 tension-filled moments. Team Russia scored first, with Datsyuk of the Detroit Red Wings for years splitting the U.S. defense of John Carlson and Brooks Orpik. He then fired off a wrist shot that got past Quick on the glove side.

T.J. Oshie (St. Louis Blues) scored the deciding goal in the eighth round of the tiebreaking procedure to give the U.S. a 3-2 victory at the Bolshoy Ice Dome. Oshie netted four goals altogether

At 9:27 of the third period, Team U.S.A, took a 2-1 lead on a power-play goal by Joe Pavelski. The goal was set up by Patrick Kane, who had fed Pavelski a perfect cross-ice pass.

A controversial call occurred when an apparent goal by Russia defenseman Fyodor Tyutin was ruled not to be an actual goal because the net had come off before the puck went in.

After the game, teammate David Backes tweeted about Oshie’s dramatic performance, and defined what he called the “Oshie Trick,” writing that it was: “4 goals in a shootout.”

Oshie’s fiancée, Lauren Cosgrove, is in St. Louis, watching the Sochi Winter Olympics. She is close to giving birth to their first child.

Eight nights in a row now, since the Opening Ceremony, NBC’s coverage of the Sochi Winter Olympics has surpassed the amount of viewers of the last European Olympics in Torino.

Also, Friday marked the seventh consecutive day since coverage of the Olympics began on Saturday, February 8, that NBC topped the amount of viewers of the 2012 London Summer Games. NBC averaged 977,000 viewers Friday during the 6 a.m. to 3:00 p.m. ET time period. That’s up 60 percent from the com parable Friday of the London Olympics.

On Sunday, Team U.S.A. will play its final preliminary hockey game against Slovenia, which won its first-ever Olympic game versus Slovakia on Saturday, beating them 3-1.