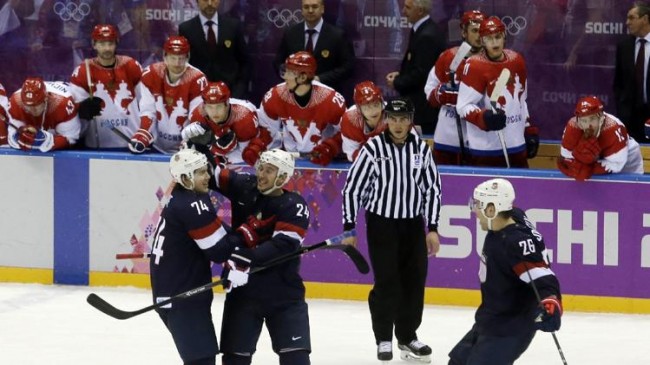 Coming into the Sochi Olympic games, there were concerns about how the United States would match up against other powerhouses in the tournament. The US defense was considered young and inexperienced, and their forwards were considered less skilled than their Canadian and Russian counterparts. However, thanks to the shootout heroics of forward TJ Oshie, Team USA would survive their first matchup with Team Russia and win 3-2.

The first period saw an evenly played matchup between the two teams. Though the crowd chanted and cheered for the home team on every shot and every hit, neither team was able to find the back of the net. The United States would be given a powerplay late in the first period, but they would be unable to convert on the opportunity. The Russians would outshoot the United States, but both the US goaltender, Jonathan Quick, and the Russian goaltender, Sergei Bobrovsky, would make the saves their team needed.

The second period saw a much stronger start from Team Russia, forcing a holding penalty on Max Pacioretty just five minutes into the period. The Russians had their chances during the ensuing powerplay, but could not beat the United States penatly kill. However, building off the momentum from a strong powerplay, the Russians scored the first goal of the game just minutes later. Russian defenseman Andrei Markov found Team Russia’s captain, Pavel Datsyuk, streaking past the bench. Datsyuk split the United States defense and fired the puck past Quick, as the crowd erupted in celebration.

Datsyuk was able to find a seam in the US defense because defenseman, Brooks Orpik, was caught flat-footed and was unable to match Datsyuk’s speed. Orpik’s speed and ability to match up against quicker players was a concern for many US fans when the roster was announced. Though physicality was the reason given for Orpik’s inclusion on the team, the Olympics bigger ice surface favors speed over physicality. It was a questionable decision from the coach, Dan Bylsma, to scratch quicker defensemen, like Justin Faulk, in favor of the veteran player and a decision that burned Team USA on that goal.

Frustration got the best of both teams just minutes after the goal, as Russian defenseman Fedor Tyutin and American forward David Backes exchanged crosschecking penalties . Forward Alexander Radulov also took a crosschecking penalty later in the period, putting the Americans on a powerplay and giving them the opportunity to tie the game. An opportunity they took full advantage of. After an initial shot by Phil Kessel, James Van Riemsdyk found the rebound and passed it to the side of the net. Bobrovsky was expecting another shot, leaving defenseman Cam Fowler a wide open net to score on. Though this game was not the shootout expected against Russia, Team USA was surviving nonetheless.

A penalty by Patrick Kane late in the second period would allow Russia to start the third period on the powerplay, and though the United States would kill the penalty off, they would take another one almost immediately after. This one a questionable interference call on Dustin Brown. Again, Team USA would survive the lethal Russian powerplay. Another penalty by Radulov would again give the United States a goal, this time to take the lead. After opening up a seam in the Russian penalty kill, Patrick Kane found Joe Pavelski on a crosscrease pass, who slammed the puck into the net past the Russian goaltender. But the Russians would respond with a powerplay goal of their own, Datsyuk getting his second of the game after another penalty by Dustin Brown.

That would tie the game at two, a score that would remain until the shootout. Shifty forward TJ Oshie would be the first shooter for the Americans, and would give the United States an early lead in the shootout by outwaiting the Russian goaltender and putting it between the pads. That lead would stay until the third round of the shootout, when Russian sniper Ilya Kovalchuk would fire the puck past Quck’s glove to tie the shootout late and bring the shootout into extra rounds. Due to international rules, teams are allowed to reuse shooters from previous rounds, a rule both teams took advantage of. Kovalchuk and Oshie traded goals again and again, but in the end, Oshie found the edge over the Russians, on his sixth shootout attempt. It was the most anticipated game of the tournament so far, and one that lived up to its expectations as Team USA survived the shootout against Team Russia and won, 3-2.