The Walking Dead After (Review)

By Douglas Cobb on February 9, 2014Comments Off on The Walking Dead After (Review) 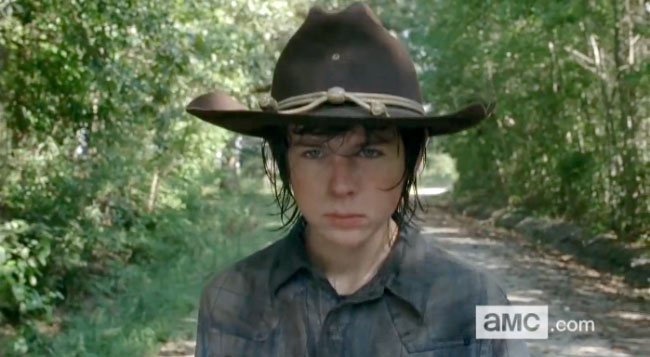 On The Walking Dead (AMC) tonight, the second half of season four begins with the character-driven episode, After. Sheriff Rick Grimes (Andrew Lincoln) and his teen son, Carl (Chandler Riggs), along with the rest of the survivors who have followed Rick, have been traumatized by their recent devastating battle with The Governor, and now they are split up into small groups of two to three. The next episodes promise to be mroe character-driven ones.

The Walking Dead episode After begins with an aerial view of the prison encampment which Sheriff Rick Grimes and his followers have called their temporary home. Michonne is the first of the main characters we see, going about hacking the heads off of zombies with her katana.

Then, Michonne (Danai Gurira) lures a zombie over to where he is pierced through with wooden stakes from a fence, and hacks his arms off. She ties him and another zombie up with ropes, and then walks them at the ends of the ropes.

After the first commercial break, we see Carl Grimes walking ahead of his father, Rick, who tells him to “Slow down.” Rick is hoarse, and staggering, still feeling the effects from the fierce fight he had with The Governor. They go in search of a place where they can take shelter, and in front of a likely house, they go inside of it and make sure it’s clear of any zombies.

However, there is the tell-tale sounds of at least one growling zombie there. Rick tells his son to stay back, and he hits a huge zombie in the head with his axe. It’s not slowing the lumbering zombie down, so Carl shoots it in the head. Rick reprimands Carl, saying that he had the zombie, but Carl told him that he’s still too weak.

Then, we see Michonne still leading her zombie duo with ropes.

Once again, Rick and Carl are looking for another dwelling, and Carl kicks in the door of a house. Rick wants him to slow down. Carl yells out, “Hey, asshole!” to get the attention of any zombie that might be about. Rick again tries to reprimand Carl, but Carl answers that if there were any zombies around, they would have come out by now.

Exploring the house room by room, Carl looks at the objects there longingly, as if remembering a past life he can never get back again. Carl ties a rope around a door knob in one of the rooms, and they settle down for the night.

Rick offers Carl food, who says: “I don’t want any.”

Rick looks at himself in a mirror. He looks pretty messed-up, almost like a walking zombie, himself.

Then, we see Michonne in a flashback, holding her son. Michonne’s lover, Mike, is at a table, with their friend, Terry, asking her “Why?” Then, she sees both men still sitting there, without their arms, and she screams –she has been having a nightmare. 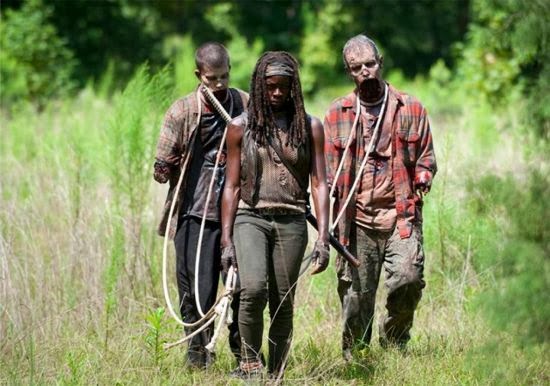 Back at the house where Rick and Carl have spent the night, Carl has found some cereal and pours it into a bowl to eat it. Rick is still asleep. Eventually, he goes to try to wake up his father, who has been sleeping soundly on a couch, but no matter how loudly Carl yells, Rick isn’t responding.

Zombies apparently hear Carl yelling, as they rattle the door that Carl has tied with the rope. Two zombies are outside the house, trying to get in. Carl leaves the house, armed with a gun, and lures the zombies away from the house while Rick still sleeps.

Carl is backing up as he leads the zombies away. Then, he turns around to see another zombie approaching from behind him, and he doesn’t look so confident any longer. The Walking Dead then went to yet more commercials.

Back from the break, Carl stumbles and falls, and the zombies get closer and closer to him. He manages to dispatch them, one after the other, with his gun, but just barely. They fall on top of him. Carl gets up, and vomits; then, he says: “I win.”

Seeing no other zombies around, he says “Cool.”

Michonne is leading her charges among other zombies, who don’t mess with her, as long as she is leading the two zombies.

Back at the house, Carl tells his dad: “I killed three walkers.” He adds “I saved you! I saved you!”

Carl: “I don’t need you anymore. You can’t protect yourself. You couldn’t protect Judith. Or Hershel.”

Back from the break, Carl is outside the house. He tries to break down the door of another house with his shoulder, and fails, falling to the porch, and saying: “Dammit!” Getting up, he finds that the door wasn’t locked, and he goes into the house to scavenge for food and to clear it of any zombies that might be about.

On the second floor, Carl goes from room to room, armed with his rifle. Approaching one door, it bursts open, and a zombie comes charging at him. Carl shoots it, but doesn’t stop it, and his gun runs out of bullets.

Carl tries to get a window open in another bedroom, but can’t –he picks up a lamp, and hits the zombie in its head. Carl barely is able to run to another room and lock the zombie inside of one of the house’s rooms before it can get to him.

Outside the house, Carl eats something he’s scavenged, as the zombie — locked inside — tries to get at him, but can’t.

Michonne is still among the pack of roaming zombies, who, for some reason, aren’t messing with her. That is, until she swings her katana and hacks off the head of an African-American female zombie. Then, they converge on her, but she slices away, cutting the heads off of all of them.

Michonne seems like she had been waiting for something to happen, but it wasn’t happening, so she decided to make something happen, by instigating the violence against the zombies around her. She hasn’t said a word, I don’t think, this episode, but has still managed to captivate the screen whenever she’s been on it. 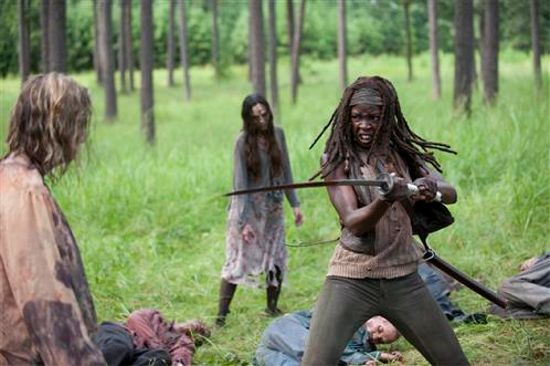 We see, back from more commercials, Michonne looking at the road; then, we see Carl inside of a house in a room, with a zombie very close to him, crawling along he floor. Carl points a gun at the figure, and says “I can’t.” It’s not a zombie at all, but his father, Rick. Carl says “I can’t” and “I’m scared.” he has discovered it’s not so easy to be on your own, after all

Inside of a house in Woodbury, Michonne says “I missed you. Back at the camp, it wasn’t you who did it. You were wrong. She’s very emotional. She says: “I know the answer. I know why.”

Leaving the house, she sees a zombie, and swings her katana, hacking its head off.

Back with Rick and Carl, Rick says: “You shouldn’t have risked it. But it’s good you found food.”

For now, they seem to be reconciled, somewhat.

Then, we see Michonne, katana at the ready, about to enter another house. Rick and Carl hear a knock at the door — Rick looks outside, and says: “It’s for you.”

He means that Micchone is outside, I suppose, knocking.

That was the end of this episode of The Walking Dead, After. Micchone was breaking down this episode, seeing vulnerability as a weakness, and trying to get ahold of herself, this episode. She had the choice of becoming her full self again, alive, or of shutting down. The episode is like a journey to her, to get over the trauma she’s been experiencing.

In a way, The Walking Dead episode, After, is also a journey for Rick and Carl, who starts off the episode being very resentful of his dad and feeling hatred for him. Carl feels he is old enough that he no longer has to rely on Rick, and that Rick is the one responsible for everything bad that’s happened so far to him and everyone else he’s known.

After was a great episode of The Walking Dead, and I am definitely looking forward to the other seven episodes to follow. What are your opinions about After? Do you think it rocked, or that it was perhaps lame? Please leave your comments and opinions below, and join me next week to watch The Walking Dead. Then, please come back to read my recap/review of it!