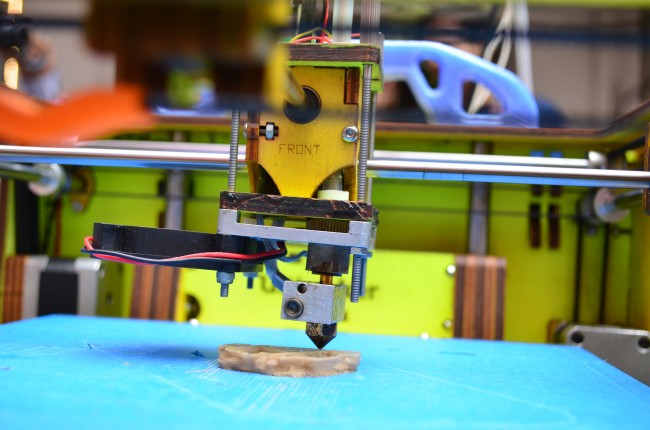 NASA and researchers from Stanford University are working towards being able to 3D print to make biomaterials such as wood and enamel in space. The process that they are working on will allow 3D bioprinters to make synthetic biomaterials out of clumps of cells.

NASA evolutionary biologist, Lynn Rothschild, is working with Diana Gentry and her Ph.D. students from Stanford to refine 3D bioprinting to transform specially engineered cells into diverse items such as human tissue, food, and structural wood beams. Gentry and Rothschild will not only work together to impress new possibilities for the medical and space technology, but their research could change the entire manufacturing industry to be able to make even the most common wood 2×4 within a laboratory environment.

The research being done on bioprinting is being conducted with a $100,000 that they received from NASA’s Innovative Advanced Concept Program last fall. Both scientists believe that the study is on track to prove their concept by October of this year. What the researchers will attempt to prove is that the process of bioprinting will be able to produce and yield arrays of cells that can excrete non-living biomaterials with the mineral parts like those found in bone, tooth enamel and wood.

The researchers have been building a vast database of cells that already exist in nature, and refining their process of engineering those cells that will be used by 3D printing hardware to make three dimensional prints of objects using their newly engineered and modified cells. Their system could have a future in revolutionizing markets as different as hardware suppliers, the local butcher, or even family dentists.

NASA’s Rothschild says that cells produce a massive amount of products on our planet from things like wood, silk, wool, cellulose, and rubber, and the same type of cells can be used to bioprint products like plant materials and even edible meat. Rothschild says that it is very unlikely that humans will take cows, sheep, or silk worms to planets like Mars, and then have the animals create their products which will then need to be processed and fashioned into a working usable object. Instead space colonies can take a 3D printer to bioprint arrays of engineered cells to secrete the products they desire to produce items on command and when they are needed.

The process does differ from the normal 3D printing process. In this research the 3D printers are used as an enabling technology. The 3D bioprinting process involves putting cells into a gel solution that holds a chemical signal. The bioprinter’s piezoelectric printing head then spits out cells that will then start to form a 3D gel-based object.

This NASA and Stanford research is not the only research being conducted in the field of 3D bioprinting. The IT company, Gartner Inc., has already predicted that ethical debates are going to start very quickly as the world finds out that 3D printers are capable of producing living tissues and bodily organs. Last year a Cornell University team printed a synthetic ear and the company, Modern Meadow from Columbia, Mo., is developing processes to 3D print leather and edible meat. Another company from San Francisco, Organovo, is already using 3D printing to create living tissues for therapeutic applications and medical research. Joining with these innovative companies are many academic research groups making advances such as being able to bioprint synthetic spider silk from bacteria.

Some innovative bioprinting companies are concentrating on the engineering of the cells, like in Rothschild and Gentry’s research, but others like Organovo are not engineering their cells. Instead, Organovo’s technology lays down the layers of cells in a way that they can mature and grow into a living functioning tissue.

Despite all the research and experiments into 3D bioprinting, a full-blown working 3D bioprinter is still not a true reality just yet. So far NASA’s Rothschild and Stanford’s Gentry are dealing with the challenges experienced by others doing the same research. Their biggest challenge is demonstrating and quantifying actual material yields to have a functional output from 3D bioprinting. However, the team has envisioned a world where wood can be reinforced with carbon fiber or even equipped with nano-wiring to change electrical conductivity. The very optimistic Gentry and Rothschild want to see if they can add a new class of building materials that anyone, not only NASA, can use to make things they desire.

One Response to "NASA Is 3D Bioprinting Wood?"