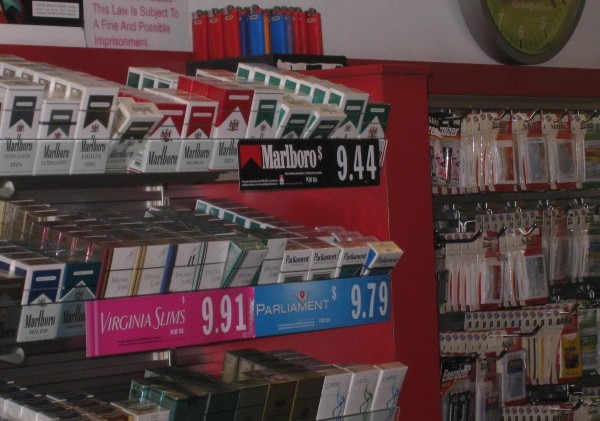 Not too long ago, smoking was considered a super sexy, en vogue social pastime that an estimated two in five Americans took part in. It was not until 1964 that the world learned, via a shocking report unleashed by the United States Surgeon General, that smoking contributed to a number of deadly health risks including bronchitis, laryngeal cancer, and lung cancer. Fifty years later, an estimated 18 percent of Americans continue to indulge in cigarettes. However, the most recent report released by the Surgeon General states the goal to reduce smoking in the U.S. to less than ten percent by 2024, leading many to believe that tobacco smoking may soon disappear altogether. CVS, America’s second largest pharmacy chain, recently announced its plan pull tobacco products from the shelves of more than 7,600 stores across the country, and members of the Democratic party have asked Wal-Mart to be next.

According to Politico, a powerful group of Democrats has challenged the national superstore to be next in line to announce their retirement from the tobacco industry. In a recent letter addressed to Wal-Mart President and CEO Doug McMillion, a group of seven Senate Democrats (Dick Durbin, Tom Harkin, Barbara Boxer, Sherrod Brown, Sheldon Whitehouse, Richard Blumenthal, Jack Reed, and Jay Rockefeller) asked Wal-Mart to follow in the footsteps of CVS by pulling tobacco products from its shelves. Reportedly, a similar letter was also sent to Rite Aid and the National Association of Chain Drug Stores.

Wal-Mart is currently considered to be the nation’s largest retailer and, according to the letter’s authors, pulling tobacco products will show support for the improvement of public health while contributing to the overall health and wellness of all Americans. The idea is not out of the question. Since CVS announced that it is pulling its tobacco products from store shelves, some are speculating that Wal-Mart could be next.

In support of the Surgeon General’s goal to reduce tobacco smoking over the next decade, the Federal Drug Administration (FDA) has started cracking down on the sale of tobacco products. For the first time since being granted the authority to regulate tobacco, the FDA has used its authority to force the manufacturer of four Bidi brand cigarettes to stop product sales and distribution. The FDA stated that the specific tobacco products did not meet the requirements of the Family Smoking Prevention and Tobacco Control Act. In a response posted on its website, the FDA stated that it is critical to their mission to make sure distribution and sale of tobacco products comply with the law. An unnamed source alluded to the FDA’s strike against the Bidi brand as the first of possibly many attempts to regulate the tobacco industry.

Tobacco use is thought to contribute to an estimated 480,000 deaths each year. With the FDA crack down and large retailers like CVS announcing plans to pull tobacco products from shelves, the recent pressure from the members of the Democratic party is leading some to speculate whether Wal-Mart could be next. Although a spokesperson for Wal-Mart has confirmed receipt of the letter, the request is still under review and no response has yet been received from the retailer.