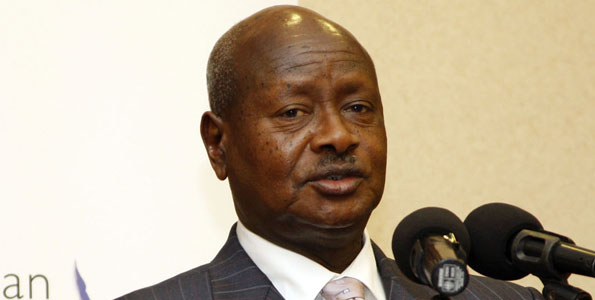 Uganda, in what seems like a defiant move against western nations, told them to keep their aid after the threat of cutting foreign aid was made over its recent anti-gay laws. This was made known by the government spokesman Ofwono Opondo. He tweeted, “The West can keep their ‘aid’ to Uganda over homos, we shall still develop without it.”

Yoweri Museveni, the president of the East African nation, had on Monday signed into law a bill that sentences homosexuals to jail for life. The bill, which is primarily targeted at what it refers to as ‘repeat homosexuals’, also bans any activity that promotes homosexuality while asking people to also condemn homosexuals.

John Kerry, the United States Secretary of State, had earlier on Monday, in a warning to Uganda, likened the bill to the atrocities of Nazi Germany and the apartheid regime in South Africa. Needless to say, Kerry likening the law to such undeniable evils says something of how strongly the US feels about the law.

Uganda, in passing the bill into law, has also been advised it was putting itself at an economic risk. This disclosure is a reaction of Sweden’s Foreign Minister Anders Borg who paid a visit to the country on Tuesday. Some nations have already started freezing or diverting foreign aid. Holland, Denmark and Norway are some countries that have announced they will be diverting or stopping aid to Uganda. While Denmark and Norway said are redirecting around six million euros, Holland stopped a seven-million-euro subsidy to Uganda’s legal system. Opondo, however, didn’t seem bothered. “Western ‘aid’ to Africa is lucrative and (a) profitable trade, they cannot cut off completely. Slave trade, slavery, colonialism, imperialism, and exploitation, Africa must stand up to Western domination” He said.

Uganda goes to the polls to elect the leader of the country in 2016. Passing the bill looks like a popular move on the part of the president to the populace. Museveni got into power when he ousted infamous dictator Idi Amin Dada in a coup. Though he has been in power for 28 years, he looks like the hot favorite to still win the election. An opposition leader, Kizza Besigye, has, however, accused the government of using the debate over homosexuality as a smokescreen to cover up more important issues. “Whenever there are some controversial issues in the country, it is brought up and everybody talks about homosexuality,” he told AFP on Wednesday, pointing to “scandals of corruption,” he said.

Uganda has also been accused of supporting the government of South Sudan against rebel forces in the country. Museveni himself admitted in January  to helping the South Sudanese president, Salva Kiir, to fight rebels in the young country. The rebel forces in South Sudan say the presence of Uganda in the conflict makes it more complicated to negotiate a ceasefire. “The foreign troops have complicated the conflict so I think it’s also a matter of common sense for them to withdraw,” Mabior Garang, a spokesperson for the rebels, said. A South Sudanese representative, however, retorted, “We have a military pact with Uganda. The status of our cooperation should only be discussed among the two governments, not with a rebel group.”

It should also be recalled that Nigeria, another African nation, had earlier signed into law a bill that jails any homosexual person for 14 years despite opposition to the from many quarters mainly outside the country.