Victoria, the Queen Who Influenced Photography

Victoria, Queen of England, had a profound influence on photography, starting with her first encounters with the medium as a young woman to her 60-year Diamond Jubilee portrait in 1897. Queen Victoria understood early on, what it would take the rest of the world many years later to appreciate; that photography was dual-purpose. It could be used as an artistic medium, or as an instrument of propaganda, chronicling war.

Over the course of her reign, Queen Victoria was photographed countless times from daguerreotypes to albumen silver prints. She was portrayed as a loyal wife, caring mother, grief-stricken widow and powerful ruler, but most of the images were kept private, not for public view.

Having reigned for 63 years, she held the longest ruling of any female monarch in history, and longer than any other British monarch did. During her sovereignty, she witnessed a “mini revolution” in the advances of science with Darwin’s Theory of Evolution, communications, technology and industry with the building of railroads and the London Underground. Yet, of all the new technology, Queen Victoria was passionate about photography. Victoria was the first crowned head of England to have her entire life recorded in photographs, and her portraits became symbolic of an entire age.

The Getty Museum in Los Angeles presents A Royal Passion: Queen Victoria and Photography until June 8, 2014. The exhibit tracks the development of Victoria’s understanding and implementation of photography. It explores the bond between the young queen and the new medium. Works from The Royal Collection include private portraits of the Royal family, rare daguerreotypes, and prints by William Henry Fox Talbot, Julia Margaret Cameron and Roger Fenton to name a few.

The story of the Queen Victoria is deeply interwoven with the origins of photography.  She was approaching 20-years-old when photography first appeared on the streets in Paris by Louis-Jacques-Mande Daguerre. Then, William Henry Talbot introduced his version in London in 1839. Although both men’s methods were different, they profoundly changed how we view the world, by recorded accounts.

The Queen and Prince Albert harmonized on many levels, and photography was no different.  After their marriage, they were avid supporters of new technology and early British photography.  They learned the process of creating a daguerreotype in their exclusively built royal dark room. By 1842, Queen Victoria and Prince Albert began avidly collecting photographs, daguerreotypes, calotypes and glass plates.

From there, the royal couple commissioned family portraits and surveys of the royal grounds, employing local photographers like J.J.E. Mayall and Roger Fenton, photographer of the Crimean War. They became patrons of the London Photographic Society, and attended exhibits that included the 1851 Great Exhibition at Crystal Palace in London. For many visitors, it was their first encounter with photography.

In 1852, a portrait was taken of the Queen and her children. However, the Queen viewed the execution of herself as “horrid,” to such a degree that she “scratched out her face from the negative.” After that sitting, Queen Victoria was much more deliberate in any future portraits, taking into account her facial expression and body position. 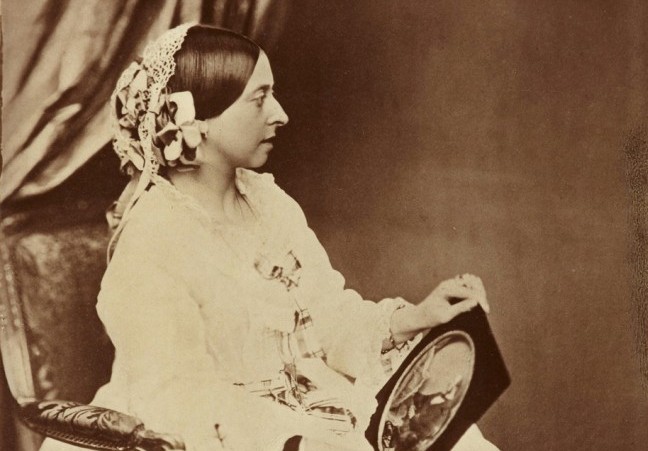 Queen Victoria, according to the Royal Collection Trust, was particularly enthusiastic to acquire portraits of people from all social classes. Her album held pictures of seamstresses and cooks who worked for the Queen to British and European royalty.

In 1860, Victoria approved to have her portrait, together with members of the royal family, as “a series of cartes de viste,” with the purpose of influencing the public’s view of the royal family. Visiting cards were already in vogue, but for the first time in history, the public had the opportunity to own a photographic portrait card of the Queen.

When Prince Albert died suddenly in 1861, Queen Victoria withdrew from public life. However, she continued to be photographed, but dressed in black as the queen in mourning. The public embraced the Queen and shared in her grief by purchasing images of the widowed Queen and the late prince.

When Queen Victoria was bestowed the title Empress of India, she assumed more power and responsibility. She felt that any future photographs should reflect her new position in defining the British Empire. Strategically, Queen Victoria assumed an imperial posture astutely. It was a contrast from her earlier, private photographs, but her image from 1893, became a lasting one.

With Queen Victoria and Prince Albert’s support and benefaction, they contributed to the early advancement if photography and “were integral to its rise in popularity.” At the time of her death, Queen Victoria had amassed one of the earliest collections of more than 20,000 photographic images from pets, family and friends to early war photographs.