By Aaron Weis on February 7, 2014Comments Off on Washington and Oregon’s Surprise Snowstorm 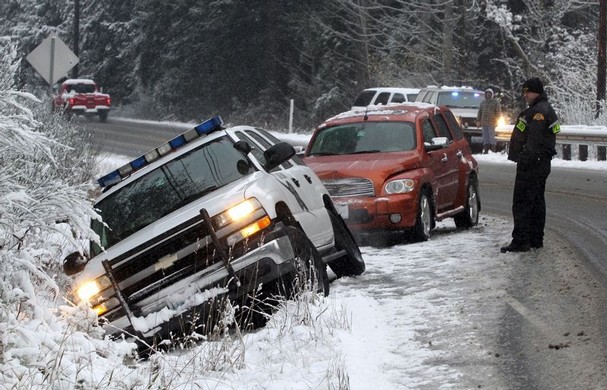 Recent weather forecasts have confirmed reports of a bizarre snowstorm that left many in a state of surprise as the forceful storm made its way through Western Oregon and Southern Washington. It has been reported that this surprise snowstorm has left both Oregon and Washington with more than a foot of snow.

Further reports in regard to this surprise snowstorm predict that another phase of the storm will hit both areas sometime tomorrow afternoon, leaving both Washington and Oregon with an additional two feet of snow. In addition, it has been reported that the snowstorm that has hit both states is a historical storm in the making. Sadly, reports surfaced the weather has claimed the life of one person. When discussing the matter, a National Weather Service spokesperson stated this was the first time that the area has had a back-to-back storm such as this since December of 2008.

In response to one of the biggest snowstorm’s to hit the the greater metropolitan Portland area City Officials have issued an official statement saying, ” Do not drive unless it is absolutely necessary.” By Thursday afternoon City Hall officials further stressed this message by stating, “We advise residents to stay off roads at this time.” Kimberley Dinwiddie of the Oregon Department of Transportation further elaborated on the issue with her official statement, “The ODOT strongly recommends that citizens avoid driving in these conditions.”

These precautionary warnings came as a result of the snowstorm causing multiple car crashes along the I-5 near Albany, which eventually lead to the highway being closed for several hours. Further reports indicate that today’s casualty was the result of these numerous car accidents. Today’s storm also resulted in various schools and offices in the surrounding areas to close and it has been reported that they will remain closed on Friday.

According to Rick Little of the ODOT, highway crews are now preparing for a night of removing snow from areas most pivotal for Oregon commuters. Little then commented, “We hope that the public understands that there is not enough equipment to return all roadways to bare pavement overnight.”

When discussing the wrecks involved in today’s snowstorm, Steve Mitchel of the Oregon State Police Department described the scene as, “sheer chaos.”

The surprise snowstorm that rocked both Washington and Oregon is historic in many aspects. A storm of this magnitude is noticeably unique, considering the areas are know for temperatures ranging in the fifties during February. This snowstorm is the greatest snowstorm in the area since the snowstorm and flood in February of 1996. This is lowest February temperature recorded at the Oregon International Airport since 1948. With the second phase of the storm expected to hit sometime tomorrow, authorities and state officials have advised that residents in the surrounding areas stay indoors. Tomorrow’s storm is expected to hit the same areas, and there is a possibility of snow flurries in Seattle as a result of the storm. Out of everyone surprised in the wake of today’s snowstorm, it would seem that meteorologist Mike Ryan would be most surprised by today’s events, as Ryan tried to diminish rumors of a surprise snowstorm back in January.