Water Found on Neighboring Exoplanet Life Could be Next 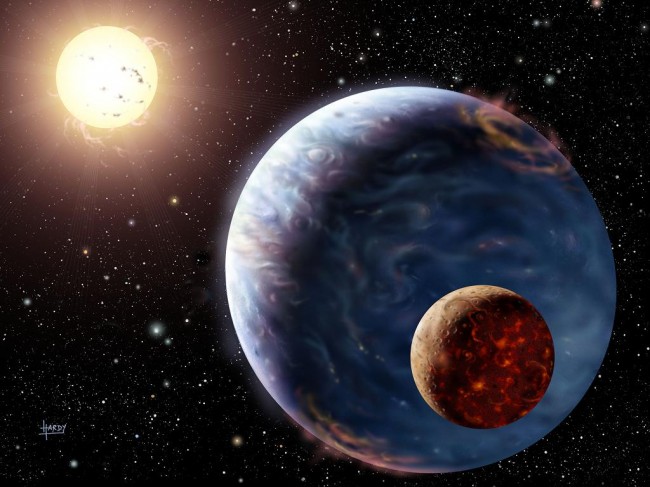 Water, to be accurate water vapor, has been found in an alien planet called Tau Bootis b, an exoplanet discovered in 1996 and discovering life could be next.  Classified as type “hot Jupiter” Tau Bootis b is among the very first planets to be discovered, it is among the closest to Earth, at a distance of 51 light years. The process used to determine the existence of water is called Near Infrared Echelle Spectrograph (NIRSPEC) which allows scientists to measure various sources of light and their wavelengths. Once these individual sources of light are identified and their individual wavelengths separated, various compounds, chemicals, and even water can be determined, down to the molecular level.

Water has been found on Mars when a piece of soil was found containing the essential source for life. Dr. Alexandra Lockwood, from the California Institute of Technology, discovered the water vapor on Tau Bootis b. While water has been discovered on other planets, Lockwood and her team are the first to use radial velocity to aid in the research. “Our detection of water in the atmosphere of Tau Boötis b is important because it helps us understand how these exotic hot-Jupiter planets form and evolve.” stated Dr. Chad Bender, from the Penn State Department of Astronomy and Astrophysics, a research associate who was a Co-Author on the paper.

Determining if there is water on an exoplanet is extremely difficult, more so than actually determining and searching for said exoplanet in the first place; discovering life is a whole other problem. A great example of this complication is stated on the Jet Propulsion Labs website, Planet Quest. When comparing a view of an exoplanet in relation to its star, it’s like trying to see a moth on a lamp-post in San Diego while standing in Boston. There are a few methods for determining position and size of a planet, and recently new techniques using Infra-Red detection has become more prevalent. Some of the earliest metrics to determine if there was a planet present was referred to as the transit method. Which simply stated, measures the dark spots moving across the light of a star. For lack of a better set of words, a stars “twinkle” is actually an object moving in front of it, usually determined to be planets transiting their orbits. When combining these methods, and using the latest IR technology, like NIRSPEC, researchers were able to report discovering water molecules in the atmosphere of Tau Bootis b.

Focusing on these new techniques scientists like Lockwood and Bender are confident that coupled with new telescopes like the James Web Space Telescrope and the upcoming 30 Meter Telescope, exoplanets that are farther from their stars and much cooler will be able to be determined. Finding water on neighboring exoplanets will become more common, and could lead to the discovery of life on these alien worlds. For now the scientific community continues to speculate about these hot Jupiter planets, how they were formed, and if life can be possible on such massive planets so close to its star.