Woody Allen and the Ongoing Problem of Celebrity Sex Offenders 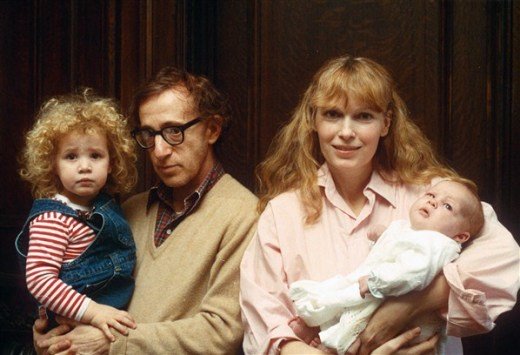 It began with a tweet, sent by Woody Allen’s son during the Golden Globes. In under 140 characters, the world was reminded of the ongoing problem of celebrity sex offenders, and the difficulty of separating classic work from criminal behavior.

While Diane Keaton was onstage accepting the Cecil B DeMille on Allen’s behalf, Ronan Farrow took to social media to remind the world that this honor was being bestowed on a man who had been publicly accused of molesting a 7-year-old girl. The allegations have been public knowledge since Allen’s fractious divorce from Mia Farrow, but the timing of the tweet caused a lot of awkwardness. Hollywood was bluntly reminded that they were honoring a suspected pedophile.

The tweet caused a minor stir in the press. Allen’s publicist stated that the incident was no big deal and few people expected it to detract from the campaign to pick up a few Oscars for his latest work, Blue Jasmine. Now this minor stir is ready to turn into a major storm following an open letter published in the New York Times wherein Dylan Farrow describes in graphic detail exactly how the filmmaker molested her throughout her childhood.

The letter makes for harrowing reading, and it seems almost trivial to ask if it is going to affect Cate Blanchett’s chances of winning a Best Actress Oscar, or if Woody Allen himself should be allowed to win tonight’s Writer Guild Award for Best Screenplay. But it is part of an ongoing problem, one that was raised by Ronan Farrow’s initial tweet? Is it okay to honor an artist who is believed to have committed serious crimes? How exactly should society deal with celebrity sex offenders?

The obvious comparison here is Roman Polanski, the veteran filmmaker who fled rape charges in the U.S. in 1977. That Polanski is a rapist is uncontested; but his reputation as an auteur has largely gone unaffected and Polanski apologists such as Whoopi Goldberg have famously tried to argue that what happened was not “rape-rape.”

Polanski has continued to make movies since the incident, and has been honored all over the world with awards and retrospectives, despite protests from feminists and anti-rape campaigners. The general consensus is that Polanski, as a filmmaker, is “forgiven” as his contribution to cinema outweighs his crimes.

Meanwhile, Britain has been rocked by a number of celebrity sex scandals in the past year. The nation has been forced to stop and re-evaluate its entire cultural output, with its Operation Yewtree bringing some of the best-known entertainers to court on charges of rape and child abuse. The person that started this off was Jimmy Savile, a TV presenter, DJ and household name throughout the 70s and 80s.

Following his death, Savile’s victims began coming forward one by one, until it became clear that this beloved celebrity was actually one of the world’s most prolific child abusers, with hundreds of victims including disabled, terminally ill and socially vulnerable children. Savile’s TV shows were regularly repeated on British television up until the revelations, but have now all been withdrawn.

More recently, Ian Watkins, lead singer of Welsh punk band Lostprophets, was convicted on several sex charges involving babies. The details of the crimes were so horrific that many media outlets refused to report them. In the wake of the trial, some record chains including HMV confirmed that they would no longer sell any of the band’s records.

All of which raises the question: why are Savile and Watkins now personae non gratae, while Allen and Polanski can reasonably expect to be hailed as great artists for the rest of their lives? Is it because of the severity of the crimes? This idea has disturbing connotations. It implies that there is a certain amount of rape and pedophilia that is considered acceptable. One victim is okay, but multiple victims are a no-no. When it is put that bluntly, the idea seems outrageous and even the most devoted cinema lover must surely agree that one victim is one victim too many.

The other explanation is perhaps to do with the quality of the work. Watkins and Savile produced trashy ephemera that, being honest, was barely remembered by the time their victims came forward. Savile hadn’t been a presence on TV for the 20 years prior to his death, and banning the sale of Lostprophets CDs probably didn’t make that much of a dent in HMV’s annual profits.

Polanski and Allen have made some of the most influential movies of the last fifty years, with Chinatown and Annie Hall both featuring regularly in the list of greatest movies of all time. Their work is absolutely beyond reproach, that’s for sure; but does that give them a free pass?

It is interesting to compare their treatment to that of Elia Kazan. The Turkish-born director produced immensely important works such as On The Waterfront and A Streetcar Named Desire, but fell out of favor for naming names to Joseph McCarthy’s House Of Unamerican Activities. The antipathy towards Kazan continued for his entire life. In 1999, the Academy presented him with a lifetime achievement award. Several prominent actors, such as Nick Nolte and Ed Harris, refused to applaud as the 89-year-old took to the stage.

The truth is that society does not really know how to deal with celebrity sex offenders, especially when the work they’ve produced is widely admired. Fans and supporters will try to sweep it under the carpet and people will try to focus on the work. Perhaps it is possible to celebrate the art while condemning the artist, but hopefully society will not soon be listening to Woody Allen’s apologists trying to claim that it wasn’t “rape-rape.”