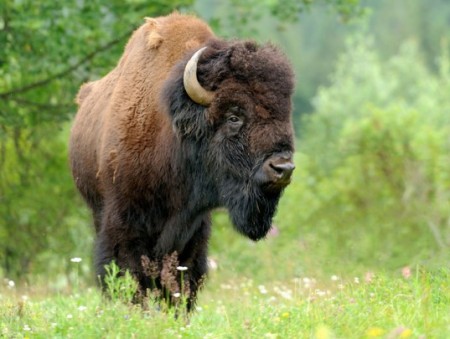 There is reason to hope that in the future the bison herds of Yellowstone National Park may live completely free of a disease that today afflicts half of the population. Researchers report that they have successfully identified, quarantined, and bred bison that were free of brucellosis in an effort to establish a disease-free population.

Brucellosis is a bacterial disease that is found primarily in cattle, bison, and elk. In these animals brucellosis causes infertility, lowered milk production, and abortions. The disease is reported to spread through contact with an infected individual. Brucellosis can also infect humans and cause a flu-like disease that is referred to “undulant fever.”

In addition to the threat posed to human health, infections of brucellosis in cattle herds have cost US cattle farmers and the federal government billions of dollars. The United States Department of Agriculture’s Animal and Plant Health Inspection Service (USDA APHIS) has worked for over a decade to eradicate the disease from the United States. Bison infected with brucellosis that normally live within Yellowstone National Park pose a threat to the cattle farmers that ranch within the Greater Yellowstone Area. The fear is that if these infected bison migrate outside of the park (which has happened before despite attempts to control the park borders) they could quickly undo years of work to eradicate the disease.

In a recent publication from the Journal of the American Veterinary Medical Association, researchers in Yellow Stone National Park reported success in being able to correctly identify and quarantine bison that are free from brucellosis. This cohort study followed a herd of 214 bison over the course of seven years. Over this time period researchers regularly collected blood serum samples and tested it for brucellosis. Infected members of the herd were euthanized immediately. Half of the remaining healthy bison were euthanized as well and sampled for more tissues for laboratory analysis. The remaining herd was monitored, tested regularly, and pruned of individuals who presented with the disease.

Though seemingly harsh, in the end the study produced a healthy, breeding herd of bison.  In particular the elimination of brucellosis-infected mothers is a special victory because it has stymied the vertical transmission of brucellosis that regularly happens during the birthing process.  In addition to that, tissue testing from the euthanized healthy bison showed no traces of brucellosis infection.  This reaffirms that the diagnostic testing tools employed for this study are effective.

However, the challenge of completely eliminating brucellosis from all the bison within Yellowstone is imposing. Even estimating how many bison would need to be tested is a difficult question. In 2012, it was estimated there were around 4,500 bison living within the park, but this number varies depending on the sampling methods used and the season during which the herds are observed. But at the very least, the idea of collecting multiple blood samples from thousands of bison that all migrate in continuously reorganizing herds is daunting.

Though it will take a lot of toil and many years to actualize, the key is to establish isolated pockets of healthy bison throughout the park. If this can be done, then the efforts to systematically weed out sick individuals may more quickly see gains in establishing a healthy bison population. With the successful quarantine and proper management, there is reason to hope that the bison herds of Yellowstone National Park may one day live entirely free from brucellosis.