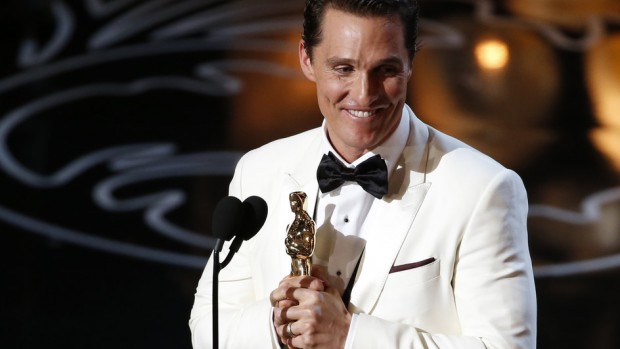 Matthew McConaughey was a big winner last night receiving an Oscar for best actor at the academy awards for his role in the film Dallas Buyers Club. In the film, he portrays a heterosexual man stricken with AIDS who circumvents the U.S. government to obtain medications for fellow victims. McConaughey was accompanied to the gala event by his lovely wife Camila Alves and his mother, whom he is clearly devoted to, but he brought someone else with him as well. McConaughey brought God with him in his heart. Unlike so many of the Hollywood elite who won awards and thanked only their human cohorts, McConaughey used the “G-word” during his acceptance speech and gave God credit for “gracing” his life and providing him with opportunities that no “human hand” could have provided.

McConaughey’s thanking of God in his acceptance speech caused the atheists and rabid anti-Christianity liberals on Twitter to foam at the keyboard. Because of the “G-word” the ever so tolerant left and spiritually bereft called McConaughey a “weirdo Christian,” asked him to stop the “stupid God talk” and one tweeter, who defines herself as a “pop culture enthusiast, ardent feminist and unabashed nerd,” tweeted for McConaughey to stop talking about God because he was “ruining it,” as in ruining his academy award acceptance speech.

One Twitter user even chastised McConaughey claiming that God had nothing to do with his winning of the academy award and that somehow he won it off the backs of millions of AIDS victims. In addition, the tepid response from the bejeweled audience when McConaughey gave God his due was much commented on as though somehow that validated the negative views about Christianity expressed on social media. Considering the demographics of the audience, asserting that their views in response to the “G-word” are representative of mainstream America is ludicrous.

On the flipside, the fact that McConaughey used the “G-word” in his academy award speech quickly became news of a different kind for the right of center media and conservative social networkers. A variety of tweets thanked and celebrated McConaughey for “looking up to God.” While the praise he received is not remarkable, it is remarkable that in a nation founded on Christianity thanking God has become “news” rather than the norm.

In his speech, McConaughey said there are a few things that he needs. He needs someone to look up to, which for him is God, for something to look forward to, which for him is his family and finally for something to “chase.” He used the analogy of himself as his own hero who ten years down the road might have accomplished great things. Yet, he acknowledged that his heroic self is a benchmark that will always be ten more years down the road. Some mistook his words for arrogance and chastised McConaughey for calling himself a hero. The point they missed was that the goal he is chasing requires him to strive to be a better man, not just now but for decades to come. That viewpoint is much less about arrogance than a perspective that has likely contributed to the success McConaughey has experienced, not only as a family man but also in his chosen profession.

Matthew McConaughey did not just win an Oscar for best actor, his academy award speech was a winner as well. It was well rehearsed, delivered in his usual folksy style and thanked the important people in his life, God, his family and himself in that order. His use of the “G-word” may have offended some but for the most part mainstream viewers simply took it in stride as a commonplace “norm” and unremarkable. Those who find Christianity abhorrent are the ones that turned McConaughey’s speech into political fodder and attempted to undermine his message. McConaughey ended his speech with his signature three-peat, “Alright, alright, alright” from the film Dazed and Confused and although it is just a catchphrase, perhaps it could be applied to his other three-peat, the “G-word,” his family and his “better man” hero who most likely are perfectly alright in the minds of mainstream America.