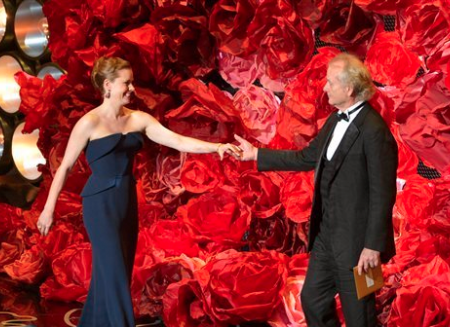 There shouldn’t have been a dry eye in the house; Bill Murray gave his old pal, the late Harold Ramis a shout out as he was about to read the Academy Award winner for Best Cinematography. The Groundhog Day star, just one of the three films that Ramis either directed or co-starred in with Murray, the actor slipped in one last name to the list of nominees before reading out the winner.

Amy Adams, who was nominated for her role in American Hustle – sadly she lost out to Cate Blanchett for her role in Blue Jasmine – stood at the podium with the 63 year-old performer as they read out the nominees for the category. Adams looked faintly surprised and then broke into a huge smile as Murray gave his late pals name and the three films.

For those that are interested the nominees for Best Cinematographer were: Philippe Le Sourd for The Grandmaster; Bruno Delbonnel for Inside Llewyn Davis; Phedon Papamichael for Nebraska; Roger A. Deakins for Prisoners and Emmanuel Lubezki for Gravity . After The Monuments Men . After the actor read out these names he paused for a moment and said “we forgot one.”

Bill Murray gave his old friend Harold Ramis a shout out where he named three films that they both had shared. Caddyshack, Groundhog Day, and Ghostbusters were listed and he begged the Academy Awards officials to “please forgive” him for the adlibbed moment; it was a winning moment.

The audience and Amy Adams applauded the sentiment and there was cheering and many smiling faces as cameras moved over the glitterati who were assembled at the Oscars ceremony. Murray gave his heart felt shout out just days after he had given Time magazine a statement where he addressed his close friends death.

The statement, which listed the films that the two men had worked on or collaborated on, even mentioning the off Broadway show The National Lampoon Show, said basically that Murray felt that Ramis had “earned his keep” on earth and he finished by saying “God Bless” Ramis.

Ironically, moments later in the awards ceremony, Ramis had his picture show up in the obligatory memorial reel which commemorates all show business luminaries who had passed on over the last year. It was a tear inducing moment, or moments, when both Murray and the memorial listed Ramis and all the other talented people who gave so much to entertain their fellow man before they moved on.

Ramis himself said in interviews that he always wanted to be the funny one, but realised after working with Murray and others that it was his job to provide the occasional funny while helping his co-stars to make the most of their laughs. It was a job that Harold did well as can be evidenced by his work with Murray.

One film that the actor forgot to mention in his tri-film list during the Harold Ramis shout out was the 1981 film Stripes. This film showed just how well Ramis performed as the “second banana” to his friend’s character. Showing, in his performance, the “occasional funny” where needed and supporting the crazier parts of Bill Murray’s role where needed by being, perhaps, the most sane member of the film. The overall Academy Awards winner could be Murray with his touching adlib which was his late friend Harold Ramis’ shout out. You can watch the moment in the video below.