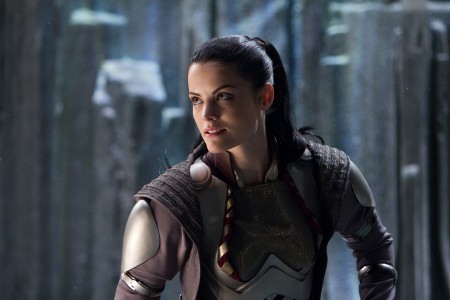 Agents of S.H.I.E.L.D. Yes Men gives its audience another little glimpse of its big screen cousin, so to speak, by bringing in Lady Sif. This Asgardian warrior, who appeared in the film Thor,and briefly in the sequel Thor: The Dark World is played ably by actress Jaimie Alexander who does not allow the constraints of being on the smaller screen interrupt her channeling of this strong female character. It does seem to be the show’s trump card; pulling in characters from the larger screen verse of Marvel.

In this week’s episode, which was foreshadowed by the teaser at the end of last week’s T.A.H.I.T.I. which showed the arrival of the sorcerous Lorelei. This powerful seductress steals a new bride’s husband and then discards him after finding a man who commands his own small army, Rooster, aka Dwayne. His army consists of motorcyclists who are meant to resemble Hell’s Angels.

Meanwhile back at the S.H.I.E.L.D. plane the agents are discovering, via Lady Sif, that every man Lorelei meets becomes her instant “yes man.” Her powers are such that she can command most men with just her voice; others she must touch as well. Either way, she can make men do just what she wishes. Sif explains that during the dark elves battle, as seen in Thor: The Dark World, the seductress escaped from her dungeon and got rid of the Asgardian collar which stopped her from speaking.

Sif, expresses shock, and suspicion, at the fact of Phil Coulson’s being alive after Thor told of Phil’s death, as seen in The Avengers. The agent asks that she not tell the King of Asgard as he wants to do that himself. While still on the plane, Simmons is frustrated at the lack of progress in her attempts to isolate the GH 325 drug which she gave Skye in last week’s show. Now that the magic drug is in the girl’s system, it cannot be found with the limited resources on the plane. Simmons wants to send the blood samples up to S.H.I.E.L.D. HQ and Phil refuses point blank.

As the team chase down Lorelei, and lose Agent Ward in the process, they end up in Las Vegas where the spellbound S.H.I.E.L.D. operative takes the Asgardian in an effort to give her what she wants. The two wind up in Caesar’s Palace and Ward gets very up close and personal to his temporary new lover. By the time Coulson and his team of cavalry arrive, Lorelei and Ward have left.

Heading back to the plane, it turns out that the Asgard temptress has taken over the aircraft with Ward’s help as well as using the services of Fitz. Once the “good guys” win back the plane, the prevailing theme becomes one of following orders; in the case of Lady Sif, Odin’s needs come before her own. She explains this to Phil, who has made up his own mind about the secret behind his “resurrection” and Skye’s miraculous recovery. There is also the disturbing fact that one of Coulson’s people have been keeping an eye on him.

Of course Coulson is not happy about the fact that not only was he lied to about his life saving operation, in an aside to another agent he explains for the first time that Tahiti sucks versus the old refrain of “it’s a magical place;” but he is less than thrilled to see where this miracle drug comes from. His concern for Skye, after having been injected with the GH 325, causes him to renew his mission in catching The Clairvoyant. It seems, however, that the “alien” who provided the “medicine” which cured both Coulson and Skye, must have been classified by the scientists, who turned the poor expired creature into a test tube, as a “Giant Humanoid” which could easily translate into GH 325 with the numbers equalling the alien’s height. Agents of S.H.I.E.L.D. Yes Men was penned, in part, by Joss Whedon himself and this type of thing would be right up his alley. Right along with the old alien mutant creature scrolling across the bottom of the screen emoting “Err Arg.”