Allen Iverson Goes Down in History, Has His Jersey Retired 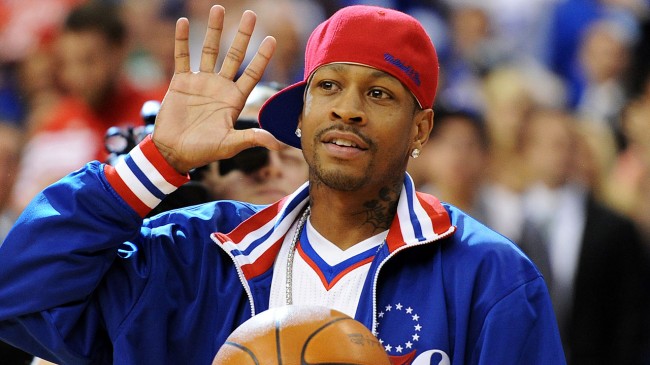 Allen Iverson went down in history on Saturday when he had his renowned No. 3 jersey retired at halftime of the game against Washington. High above the Wells Fargo Center court, “the Answer’s” banner throned between Maurice Cheeks’  No. 10 and Charles Barkley’s No. 34. 20,000 Philadelphia 76ers fans animated the atmosphere and offered Iverson the standing ovation he rightfully won by becoming one of NBA’s brightest stars. The legendary player’s retirement dream came true as his team offered him a parting gift, namely a custom designed fishing boat, and giants like Kobe Bryant and LeBron James welcomed him by their side.

“The Answer,” as he was affectionately dubbed injected excitement one last time into the Sixers, although the team had lost 12 straight games entering Saturday’s game. Allen Iverson went down in history for his exceptional skills, the reason why he also had his jersey retired. He played for the team close to his heart from 1996 to 2007 and his career reached its highest point when he won MVP and led the Sixers to the NBA finals. “The Answer” is 21st on the NBA’s career scoring list with over 914 games and 24,368 points scored, 30-plus points 345 times and he became an 11-time All-Star.

“Now we just have to go find the next Iverson,” Joshua Harris, Sixers owner said.

A Night to Remember

Iverson cupped his hand to his left year and the 20,000 fans burst into joy, as the famous player talked about dreams during his retirement ceremony.

He told his public that he was supposed to talk about how much he was loved, but he made sure that the public knew the feeling was mutual. His former teammates and coach expressed their love for a player whose No. 3 jersey became a best seller around the globe and who filled arenas across the country. Aaron McKie, a former teammate, remembered how he made braids and arm sleeves fashionable and how the world followed him.

Emotions and banners filled the arena as Allen Iverson went down in history and had his No, 3 jersey retired, but his skills were remembered by all NBA professionals, including Commissioner Adam Silver and his former coach, Larry Brown, who stated that it was God’s wish to coach “the Answer.” The number one overall pick in the 1996 draft thanked Brown for honing his skills and admitted that, without him, he would have remained just a raw talent.

Michael Carter-Williams, the team’s current point guard acknowledged the amount of talent Iverson brought to the city and the team and Silver pointed out that the player proudly wearing the No. 3 jersey was special and “representative of his generation.”

“It got no bigger than him in Philadelphia,” Silver said.

An idol for an entire generation, Iverson was congratulated by Kobe Bryant and LeBron James and the Sixers wore patches on their jerseys during the game which were aimed at making the player’s name immortal in NBA.

“The Answer” sent his love to all his fans and his dedication to the team where he spent his first ten seasons was rewarded with a championship belt, a custom designed fishing boat and his beloved name retired. Allen Iverson went down in history thanks to the impact he had on both the NBA and his team. The Sixers and had his famous jersey, No. 3 retired so that his name will be forever matched to the number he proudly wore.