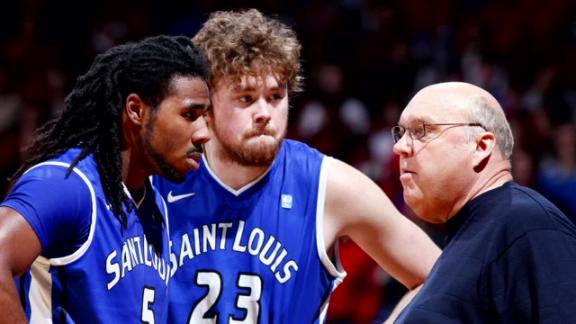 Atlantic 10 conference backers have plenty of ammunition now. The traditional mid-major conference operating out of Newport News, Virginia was given the golden treatment by the NCAA selection committee this year. The committee, usually under fire for some reason at this time of year, is sure to be scrutinized for bringing in a six-pack of Atlantic 10 teams to the Big Dance. The six teams in the tourney is a record for the Atlantic 10. The conference tied the Atlantic Coast Conference and the Big-10 with six entries each.

Scrutiny of the selection committee began before the committee even revealed its top 68. Duke Coach Mike Kryzewski was downplaying the quality of the Atlantic 10 on Saturday, following his program’s victory over N.C. State in the Atlantic Coast Conference tournament semifinals.

“I’ll get in trouble probably for saying it… The Atlantic 10, they’re a really good conference,” Kryzewski said. “…People saying there are six teams in there [that should be invited to the tournament].  Come on. I mean, they’re good, but put them in our conference and go through the meat grinder that our conference has to go through.”

Kryzewski was defending teams such as Pittsburgh and N.C. State, who, it was assumed, both had to make a run in the ACC tournament to have any shot at getting into the field of 68. The Panthers and Wolfpack both did make some much needed noise in the ACC tournament, and it was needed. Both schools advanced to the semifinals, and as a reward Pittsburgh “earned” a No. 9 seed and a first round game with Colorado, and N.C. State was rewarded with the chance to take part in the play-in game against the Big East’s Xavier in the “First Four” in Dayton.

It looks like Kryzewski’s thoughts will be put to the test. If 21-13 N.C. State can get by 21-12 Xavier, then waiting in the wings will be Atlantic 10 regular season champion St. Louis. The Billikens, who received a No. 5 seed in the Big Dance, compiled a 26-6 record on their way to the regular season title. St. Louis was stopped by the surprising 18-15 Bonnies of St. Bonaventure in the quarterfinals of the tournament.

Joining St. Louis in the field of 68 is conference tournament winner St. Joe’s, who got by No. 23 Virginia Commonwealth University 65-61 to improve to 24-9 overall. The Hawks earned a No. 10 seed and a first round match-up against No. 7 UConn (26-8) in Buffalo.

Despite the loss, VCU will also be heading to the Big Dance. Like the Billikens, they will be a five seed and play No. 12 Stephen F. Austin (31-2) in San Diego. Rounding out the six-pack that the Atlantic 10 is bringing to the Big Dance are No. 6 Massachusettes, will play the winner of the Iowa-Tennessee play-in game, No. 9 George Washington who will play No. 8 Memphis and No. 11 Dayton, who will take on No. 6 Ohio State.

Virginia Commonwealth University coach says that every team from the Atlantic 10 that got selected deserves to be there. In terms of men’s basketball, he does not see much difference between the power conferences and the little mid-major on the east coast. Smart contends that the Atlantic 10 is undervalued. He says that the buzz saw that A-10 teams go through in the conference season is comparable to the grind that happens in places like the Big-10 and the Atlantic Coast Conference.

“Our conference is still undervalued,” Smart said. ““Here’s what it is… There is a lack of … sophistication out there right now as it relates to [coverage of] the A-10.”

Undervalued or not, the Atlantic 10 is bringing a six-pack for the rest of the NCAA this year. Only time will tell how well it goes down.