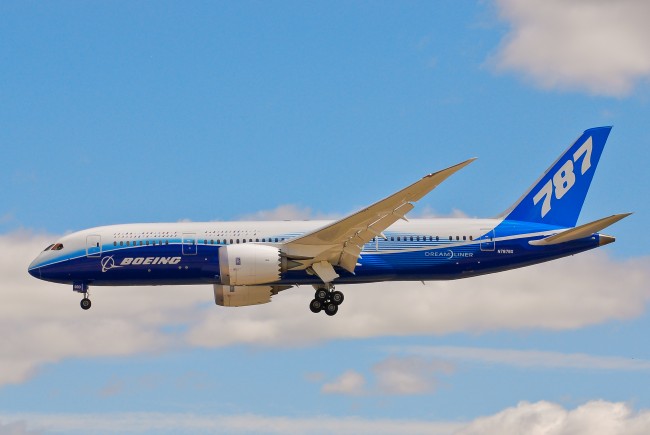 Boeing is having a bad week. Malaysia Airlines flight MH370, a Boeing 777, went missing on March 7th, the same day it was reported that flaws, in this case cracks, had been found in the wings of 787 Dreamliners currently in production. Despite the news, Boeing’s stock was only down 32 cents at market closing Friday, and only dropped an additional 1.1% during after-hours trading, leaving it at $127.43 a share.

Malaysia Airlines flight MH370 is still missing as of Sunday, March 9th at noon EST. Oil slicks have been discovered on the surface of a strip of ocean between Malaysia and Vietnam. The flight took off from Kuala Lumpur at 12:41 am local time Saturday, its destination Beijing. Investigations are ongoing, particularly in relation to two stolen passports. The flight’s manifest details two passengers, one from Italy, the other Australia, who had both reported their passports stolen in the past. Neither of these two individuals were on the flight, so questions are being posed about who was using the stolen passports to board the plane.

The Boeing 777 has had a near flawless service record for the last 20 years, but this is now the second incident in less than 12 months. Last Summer, a Boeing 777 out of Asiana Airlines crashed in San Francisco. Three people died. There were 239 people on flight MH370, three of them American and five infants. A massive search is being conducted by China, Vietnam, Singapore and Malaysia south of Tho Chu island in the South China Sea. A US Navy destroyer, the USS Pinckney, has been dispatched to the southern Vietnamese coast to help, as is a P-3C Orion surveillance plane, which was based in Japan.

Along with Boeing 777 crashes, the 787 Dreamliners in production have been reported to contain flaws that are being addressed by the Chicago-based manufacturer. Hair-line fractures have been discovered in the wings of multiple planes during construction. In total, 40 planes may be affected, but the 122 jets currently in-service do not possess the flaw according to Boeing spokesman, Doug Adler. “We understand the issue, what must be done to correct it and are completing inspections,” he said in an email.

Mistubishi Heavy Industries are the producers of the wings, which are built in Japan and then sent to the United States to be assembled with the rest of the plane parts. Inspections are ongoing at Boeing’s manufacturing plants in Everett, Washington and Charleston, South Carolina, as well at at the Mistubishi plant of origin. In total, 110 Dreamliners are set to be completed in 2014, and the problems in production have not altered that goal.

Boeing’s stock was up 58% over the last year before these two incidents, and its fourth-quarter profits were also up 26% due to commercial plane deliveries. Experts are saying that unless a structural flaw is found in the Boeing 777, flight MH370, the company should remain unaffected despite flaws with the 787 Dreamliner’s production. Boeing hasn’t ruled out operator error in regards to the Malaysia Airlines flight and are awaiting the recovery of the plane’s “black box” to learn more details about what happened. In the meantime, they are also dispatching a team to offer technical assistance in the investigation.