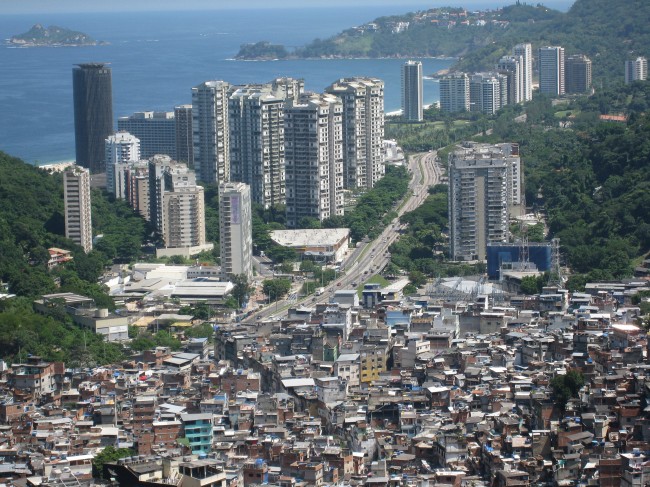 As Brazil gears up for this year’s World Cup, barrios, or neighborhoods, that have been neglected by the country are now being rejuvenated. The cleaning up though is coming at a great cost to families in some of the countries poorest areas.

As the world’s eyes turn from Sochi to Brazil, home of the 2016 Olympics, it’s the poor that are paying the price. Some groups indicate 100,000 people have been kicked out of their homes to make way for the lavish projects planned for the twin events. The poor live in a part of Brazil that hasn’t received government support for decades. For the first time since Brazil’s capital was moved to Brasilia in 1960, officials are expanding metro lines and roads as well as upgrading the airport. Some of the country’s poorest are being thrown out of their homes to make way for the renovation and expansion.

Everything has to be big, shiny, nice and pretty for the two sporting events. Marcelo Chalreo, leader of the human rights commission of the Rio chapter of Brazil’s bar association, says, “The city has become the object of big business, big interests and mega-events.”

One couple, Dalvaneide Pequeno do Nascimento and her husband, Jucelio de Souza, were given a choice by city officials. Take the deal on a lump-sump compensation package for their house and move into an apartment in a housing project or leave with nothing. Afraid of being left homeless, the couple chose the apartment. They were assigned a one-bedroom unit in a project in the far-off suburb of Campo Grande. The housing project they were placed in is 35 miles away from their former home and even further from the upper-class home where she works as a nanny.

City officials have acknowledged that about 15,000 families were relocated. Rio’s leaders insist that the moves were only done to protect people in areas that were apt to see mudslides and had nothing to do with the World Cup or the Olympics. For the 2016 Olympics though, city officials have shown plans that they intend to resettle 278 families that are currently living on land that will become part of the Olympic Village.

Amnesty International’s side of the story is quite different. AI claims that 19,200 families in Rio and it’s suburbs have been forced out of their homes since 2009. A group that advocates for affected slum residents says the figure is closer to 100,000 families. Evictions and the Olympics go together like carrots and peas. Rio’s worst-case scenario is far less than the 1 million people forcibly relocated for the Beijing Olympics in 2008 or the 720,000 moved before the start of the 1988 Seoul Games.

Rio officials claim that each of the removals has been done fairly, with those being forced out being offered a wide range of options for housing. Advocacy groups point to a different truth. The city’s removal policy leans towards taking pockets of poor people and marginalizing them even further by forcing them into the most remote suburbs.

Nascimento spends five nights a week at the home she works in as a nanny. If she didn’t, the commute would eat up six hours of her day and cost a large portion of her $500 monthly salary. To avoid the astronomical commuting costs associated with his job, her husband spends $190 a month for a tiny efficiency apartment close to his job. Their two youngest children live with her mother and her two teenage boys live alone in the housing project.

“We were working hard and getting ahead in life and then this happens. We’re not even back to where we started. We’ve gone way back even before the starting point,” said Souza.

Lowering his sunglasses to conceal the tears in his eyes, Souza says, “I would give everything just to have my little plot of land back and my family whole again.” Brazil continues to move towards the World Cup and Olympics as the poor are forgotten.