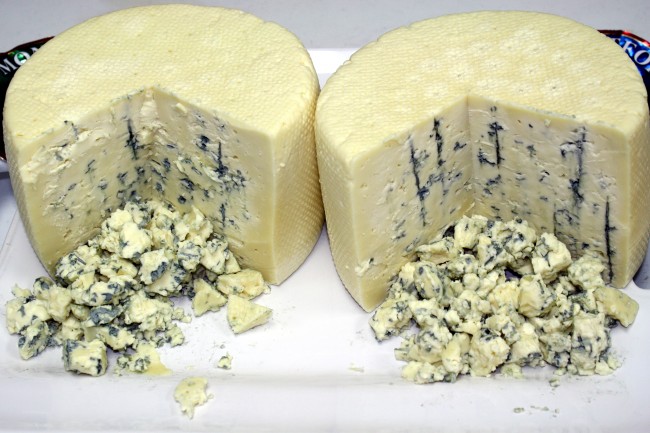 A recent investigation of the fungus responsible for blue cheese starters indicates that this organism is capable or was recently capable of sexual reproduction. Such a discovery has exciting potential implications for cheese makers who might want to take advantage of this sexual reproduction to create improved fungal varieties for the creation of new cheese flavors.

The fungus Penicillium roqueforti (also known as “blue mold”) is used to ripen cheeses and confer the cheese’s characteristic flavor, texture, and appearance. Not only blue cheese, but also Gorgonzola and Stilton cheeses rely upon the action of P. roqueforti for these purposes. The fungal spores first settle on the outside of the cheese, forming the characteristic crust. Once established, the fungus begins to grow inward towards the heart of the ripening cheese, softening it and giving it a creamy consistency and its characteristic odor.

The advantages of asexual reproduction are the speed with which the organism can grow and the how cheese-makers can be assured that spores from the same starter will all produce nearly identical results. However the lack of variation might also be seen as a disadvantage because it does not allow for much genetic variation. A lack of genetic variation means that one’s ability to create new, improved strains of P. roqueforti is limited to selecting for minor fungal variants that arise out of random mutation events.

However in a recent study it was discovered that perhaps the cheese-making fungus is indeed capable of sexual reproduction or at least was capable of sexual reproduction in the recent past. Several key points of evidence suggest this to be the case. First, researchers discovered that some populations of P. roqueforti showed a surprising amount of genetic variation. Of 16 possible allele combinations studied, 11 were found. A strictly asexually reproducing fungus would be unlikely to show such a high level of genetic diversity.

In addition, researchers found evidence for different mating types in P. roqueforti. Similar to male and female animals, fungi can exhibit two different kinds of sexual mating types—referred to as MAT1-1 and MAT1-2. The genes for conferring these mating types were found to still be intact. More than that, populations of P. roqueforti fungus were found to have a one to one ratio of the different mating types. Such an even balance between the fungal sexes indicates sexual reproduction. If populations only reproduced asexually, over time one of the two sexes tends to be completely eliminated from the population.

All of this evidence only indirectly points to the possibility of sexual reproduction in P. roqueforti. Nonetheless, the prospect that this fungus can reproduce sexually and thus be bred for desired characteristics ought to excite both cheese-makers and cheese-enthusiasts.