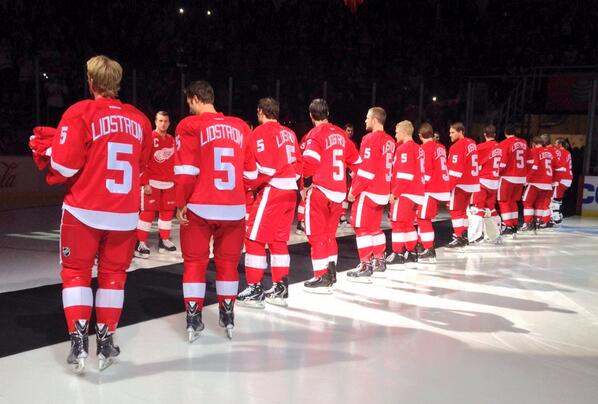 The Detroit Red Wings have made the playoffs for 22 consecutive years, the longest active streak in any professional sport. For the vast majority of this streak, there was one player that consistently made an impact for the team, a rock on the blueline that kept the Red Wings competitive year in and year out until his retirement in 2012. He was a key factor in Detroit’s four Stanley Cup wins during this 22 year streak, their most recent coming in the 2007-2008 season. On Thursday night, the Detroit Red Wings honored that player by lifting Nicklas Lidstrom’s jersey to the rafters of Joe Louis Arena, ensuring that no other player who puts on a Detroit uniform from here on out will wear the number five.

When you talk about the greatest defensemen in National Hockey League (NHL) history, names like Bobby Orr, Raymond Bourque, and Paul Coffey are names that consistently appear in any discussion. Nicklas Lidstrom is another. A present-day legend in the hockey world, Lidstrom’s play over the past two decades were always a sight to behold. In addition to the 1,142 points he contributed in 1,564 games, he won four Stanley Cups, an Olympic gold medal, the Conn Smythe trophy, and seven Norris trophies, given to the player voted the league’s best defenseman that year. His durability is almost as impressive, missing only 39 games to injury in his career, a mind-blowing number given the amount of ice time he logged for the Red Wings night in and night out.

But while the statistics are impressive, they do not tell the whole story. What made Lidstrom great during his playing days was the calming presence he brought to the ice on any given night. Lidstrom was never the most physical defenseman in the league, but he was always considered one of the smartest. His awareness allowed him to separate opposing players from the puck without resorting to big hits, instead using his stick and impeccable timing to steal the puck almost effortlessly. He also played the game clean, never resorting to cheap shots or dirty tactics when games did not go his way. The performance he put on the ice on a nightly basis earned him respect from not only his teammates and Red Wing fans, but even fans of opposing teams and their players were forced to give awed respect to the Swedish defenseman. It was this presence that made it an easy decision for the Detroit Red Wings to retire Nicklas Lidstrom’s jersey.

Before a game against long-time rival, the Colorado Avalanche, seemed like the ideal situation to hold the retirement ceremony. Beside his wife and children, and with other Red Wings legends only a short distance away, Lidstrom visibly fought back tears as his jersey slowly ascended to the rafters of Joe Louis Arena, joining six other numbers that will never be worn on a Red Wings uniform. One of which, the number nine, was Lidstrom’s initial choice when drafted by the Red Wings in 1989. He wore that number when playing overseas in Sweden, but was told “that just ain’t going to happen” in Detroit. That number had long since been retired by the Wings for another hockey all-time great, Gordie Howe. Little did Lidstrom know that 20 years later, his number would be joining Howe’s in a spot above the crowd.

The game itself seemed secondary to the ceremony. The Red Wings lost in overtime, losing sight of defenseman Andre Benoit jumping into the play and sneaking a shot past goaltender Jimmy Howard. And while that loss damaged Detroit’s chances of making the playoffs, putting the long-time streak in the most jeopardy it has been in for over two decades, for that night, it did not matter. Thursday night in Detroit was all about Nicklas Lidstrom’s jersey retirement, honoring a player considered to be one of the greatest Red Wings of all time and one of the greatest defensemen of all time.

See the jersey retirement ceremony below: